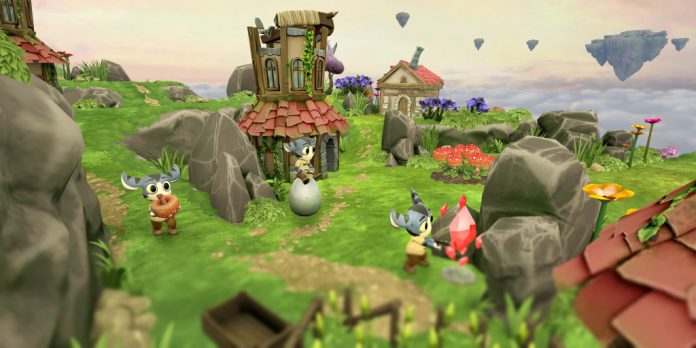 Secret Sorcery’s PlayStation VR launch title, Tethered, sprang to life earlier this week with an official announcement and a debut trailer. A strategy videogame designed to make best use of the immersion qualities of modern virtual reality (VR), VRFocus got an opportunity to get hands-on with Tethered ahead of a playable outing at this year’s Electronic Entertainment Expo (E3), in Los Angeles next week.

Peeps are your everything. In Tethered, the player takes on a god-like role in command of their primitive population of peeps. The basic agenda is to equip your peeps with the essentials required for development of a small society. This begins with ensuring that you have enough food to satisfy the peeps’ appetites before progressing to harvesting various resources and eventually building new constructs that offering additional benefits to the clan.

The gameplay is conducted with two vital inputs: the PlayStation VR’s headlook functionality and the DualShock 4’s X button. The player, in their god-like state, rests upon the clouds above the small maps below, simply looking at a cloud and pressing the X button to change their perspective of the terrain. The titular ‘tethering’ comes into play when issuing commands to the peeps.

The early E3 build, noted as ‘pre-alpha’, that VRFocus was able to experience began simply, with just a single peep. Looking directly at this sole provider and holding the X button began a tether, turning to a mushroom patch and releasing the X button commanded the peep to begin harvesting the consumable. That peep would then automatically journey to the mushrooms, harvest them and return them to your stockpile until either all of the available resources had been collected or the player issued another command. 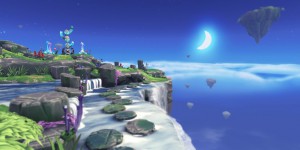 While this first peep is going about its business an egg falls from the sky. Removing the tether from the mushroom patch is as simple as looking at the peep, holding the X button, looking at the egg and releasing. That peep now travels to the egg and keeps it safe until it hatches. Before too long, a small troop of peeps is at your disposal, conducting various chores and ensuring that you have the supplies you need. Which is a good thing, as come nightfall Tethered changes pace considerably.

Tethered appears to be a fairly gentle experience at first. However, after dark combat becomes your one and only objective. During the daytime a small amount of slug-like invaders will try and much on your peeps, but at night they come in far greater numbers. Players must ensure they have constructed enough defensive buildings and organise their peeps in order to defend against the swarms, or potentially be left peep-less at the end of the night.

The ultimate goal of each level in Tethered is to collect a specified amount of souls. These can be obtained by taking out enemy slugs or, for the crueller players, by harvesting the souls of your own peeps. This very early demonstration was practically a ‘no fail’ build, however it’s easy to see the potential for growth. Expanding on the basic principles of Tethered by adding additional mechanics and larger land masses is par for the course, but the possibilities of specialised peeps and different types of buildings and resource bonuses is an obvious play. 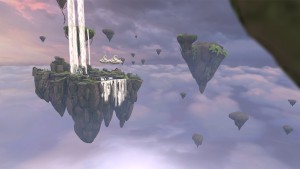 Visually, Tethered is a very well presented videogame. The lively animation of the peeps is never short of endearing, while the colourful world in which they inhabit is wide and varied in its detail. Construction presents an interesting voxel assimilation effect, with each and every generated voxel having a specific accountability in the final building. The lack of a zoom function restricts the player’s connection with the peeps – as amusing as they are to look at from afar, it seems like a waste to not allow the player to get in closer and enjoy their detailed animations to greater effect – but it’s wholly possible that Secret Sorcery has already considered additional viewpoint functionality.

Tethered is aiming to launch alongside the PlayStation VR later this year and will undergo rigorous testing at E3 next week. However, even this far out it’s easy to see how a compelling videogame experience can be made out of a handful of minutes of gameplay. Turning Tethered into a challenge lasting several hours is simply a case of expanding on the formula; the mechanics of the videogame are already sound, for which the relatively youthful Secret Sorcery should most certainly be commended.