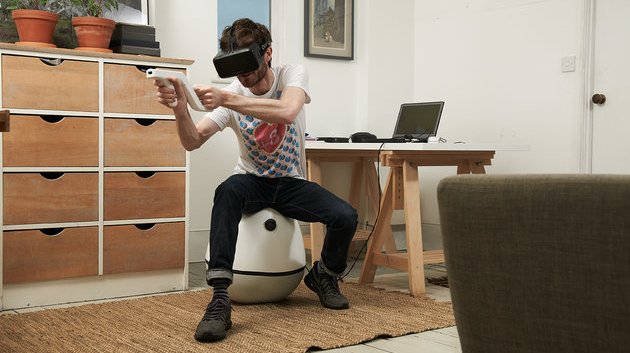 One of the issues virtual reality (VR) developers are trying to solve is that of movement. The issue being that if a player moves their character using a traditional controller motion sickness kicks in, due to the brain thinking its moving when the body is still stationary. There are lots of different ways this is being tackled, studios are trying through software, whereas manufacturers are building new kit. One person  with a simple solution is creative technologist and designer Joe Ryan, who created VRGO, a Bluetooth chair. Ryan led a successful Kickstarter campaign last year and now his design has been shortlisted for The Gadget Show Live’s British Inventors’ Project 2016.

The VRGO chair allows players to move within VR by tilting their body. The device has been created as a space-saving peripheral that’s completely wireless. It’s designed so that small movements in terms of twisting your body to a new direction can represent greater movements within the given VR experience.

There are 20 projects shortlisted for this years event, but VRGO is the only VR offering to make it through. They will all be on show at Gadget Show Live with visitors having a chance to demo the tech.

VRFocus will continue to bring you any further VR or AR updates announced for the show.