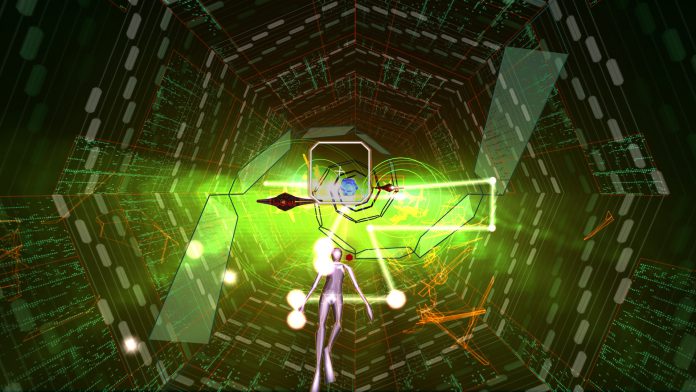 So far in VRFocus‘ Virtual Reality Developers Conference (VRDC) and Game Developers Conference (GDC) session highlights we’ve looked at many of the technical talks on the practises of working with VR tech. Things are changing up a little today, though, with the announcement of a new postmortem session for a title that will soon be making the transition to VR itself. That title is Rez, the cult classic music shooter experience that is making its way over to the PlayStation VR head-mounted display (HMD) as Rez Infinite.

Series creator and President and CEO of Enhance Games, Tetsuya Mizuguchi, will be hosting the session, which is simply labelled ‘Classic Game Postmortem: Rez‘. An official description reads: “Tetsuya Mizuguchi, the remarkable designer best known as the creator behind critically-acclaimed games like Space Channel 5, Lumines and Child of Eden will be delivering a Classic Game Postmortem on his groundbreaking rhythm game Rez at GDC 2016!

“Mizuguchi’s life work has revolved around activating our imaginations and elevating human consciousness through various forms of media, including music video games, live performances and music itself. At his newly-established studio, Enhance Games, he continues to lead an effort to develop synesthetic entertainment experiences with the power of mobile and virtual reality technology.

“Now, as he and his team draw closer to bringing Rez to life in VR as Rez Infinite, Mizuguchi will take to the stage at GDC 2016 in March to speak at length about his work producing the iconic music-driven rail shooter Rez, a game that has proven iconic and influential to a generation of game makers following its original 2001 release.”

VRFocus will be at VRDC and GDC 2016 to deliver the latest updates on the tech.