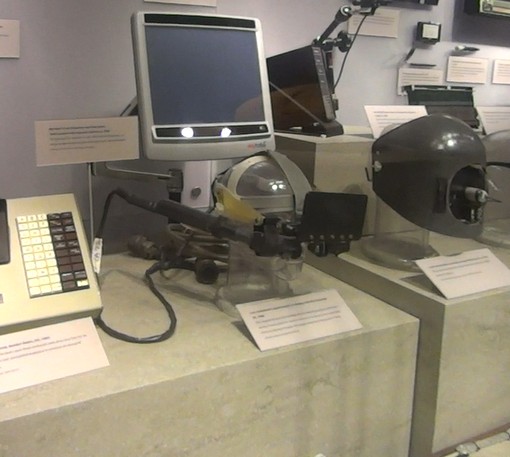 It has to be remember that a lot of the technology we are now immerse us in synthetic environments stems from the military training sector – visual simulation (Vis-Sim) technology the first to utilize 3D graphics and immersive displays, the first produced Head-mounted displays in the 1960’s developed for Vis-Sim through the military simulation corporation Evans & Sutherlands (E&S).

After crossing from microcomputer games to amusement, I was then pulled into the world of simulation in the 1990’s and had a number of experiences that truly cemented my love affair with immersive entertainment and what it could achieve. I have already touched on before my experience with commercial airline training simulators, but it was the opportunity that networked immersion offered, marked an important ‘VR moment’ for me.

One such experience took place in Chicago, in a warehouse owned by FASA, and their new company Virtual World Entertainment (VWE) and represented the testing of their new ‘Teslar’ during 1994. Surpassing the original plywood simulator pods, this sleek new module offered a true simulator, and along with its array of buttons it also used an infinity optic screen that brought the virtual landscape to life like never before. When the door was closed you actually felt like you were sitting in the cockpit of a mighty Mech fighting robot looking out onto a battle-scape on a far off planet

The 16-units in the secret warehouse were all networked together, and though still in an early stage, this was a mock-up of the new hardware that was to be deployed into the existing 20-odd BattleTech centers that were opened across the globe at the time. Based on the BattleTech board game universe developed by FASA, the company in 1990 had opened their first simulator facility based on the rudimentary plywood simulators, and had become an instant success with players keen to immerse themselves in the BattleTech universe; starting a fad in location-based entertainment centers.

The technology was not wholly original, but based on the development from the military simulation sector – in particular the work that was established through the SIMNET trials and the networked M1A1 tank and Bradly Fighting Vehicle crew training simulators, deployed in a warehouse at Fort Knox, first presented in 1985. The simulated combat environment left such an impression with those that had experienced it that it became obvious that this immersive training environment was ideal to lend itself to transporting players into a virtual world, one populated with sci-fi characters rather than Cold War combatants.

Note – It’s interesting to understand the impact that the Bradly Fighting Vehicle has had in the history of immersive entertainment – when working in the arcade scene one of the landmark games was Battlezone by Atari which  launched in 1980. The vector graphic tank simulator was a revolutionary isometric game representation. The advance nature of this immersive simulator was not lost on the US military, who commissioned a prototype called ‘The Bradley Trainer’ in 1981 that would open the door on the SIMNET trail.

With the new Teslar simulator the level of immersion had been ramped up to a hundred and the quality of physical and synthetic simulation far surpassed the rudimentary original. The improved graphics and infinity optics married perfectly with the networked play, and the knowledge that the other robot you were blasting in the virtual world was piloted by your friend sitting in a simulator across the way – the whoops and shouts broadcast over the radio link.

The way that all those involved with the project longed to jump into the cockpits and spend all their available free time combating in this virtual environment was one of those moments that proved the incredible level of engagement and excitement that immersive entertainment can offer, surmounting the attempts by the flat-screen console game approach. It is one of those moments that defined the reason why I specialize in this sector, and also why I work so hard to promote immersion, be it using a million dollar simulator, or a VR head-mounted display (HMD).