PlayStation VR had a lot to prove in 2015. Though Sony Computer Entertainment (SCE) had hit the ground running with solid tech and a demonstration of the desire to do right by it in 2014, this year it would have to keep up with Oculus VR, now backed by Facebook money, and show that the PlayStation 4 was capable of providing worthwhile virtual reality (VR) experiences. Overall, the company did its device proud, despite the fact that PlayStation VR will likely be the last HMD to launch as we head into 2016.

As with the HTC Vive, PlayStation VR’s year really began back in March when it was still known as Project Morpheus. It was here that SCE lifted the lid on a year’s worth of refinements to the original version, revealing a new model with a 1080p OLED display and an added tracking light. The most impressive improvement? That new display had a 120hz refresh rate. PlayStation 4 can’t easily run titles in 120fps, but the display could ‘reproject’ titles that were running at 60fps on console at 120fps in HMD. Just how the company is achieving this (and isn’t applying it to other devices) is unclear.

It also made PlayStation VR the first HMD to get a launch window, as SCE announced a H1 2016 release. It was disappointingly far off, but it soon became clear that the Oculus Rift and the HTC Vive were looking at similar release dates.

The rest of the year was essentially highlighted by industry events for PlayStation VR. E3 was an admittedly disappointing showing: SCE revealed a handful of new titles including some impressive debuts from the likes of RIGS: Mechanized Combat League, but revealed no new information about the kit itself. PlayStation VR’s section of the SCE press conference was less than three minutes long. The breadth of content on the showfloor helped make up for it in some small way, but this was ultimately a missed opportunity. 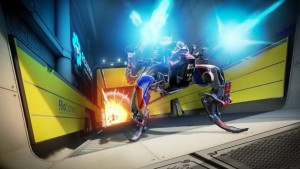 Tokyo Game Show (TGS) fared better, with the company finally revealing the full PlayStation VR name. There were also several new demos, including the addition of famous faces such as Final Fantasy and Dynasty Warriors.

But it was Paris Games Week (PGW) in which the big software announcements finally started to take place. Both Gran Turismo Sport and Tekken 7 were confirmed for PlayStation VR at the show in October, while the VR-exclusive Until Dawn: Rush of Blood was also announced.

The PlayStation Experience earlier this month was the last showcase for the year, where SCE hosted arguably the best line-up for PlayStation VR yet. Fan favourite franchises such as Rez and Ace Combat were confirmed to be coming to the kit, while brilliant new indie projects such as 100FT Robot Golf and The Modern Zombie Taxi Co. were revealed.

PlayStation VR has had an encouraging year, even if release details are still a ways off. SCE is clearly committed to make sure VR is done right, and it’s building a software library to prove it. Where the kit goes in 2016 may be the most exciting story of the year.

The post VR in 2015: PlayStation VR – Strong Line-Up Makes Up for Lack of Release Info appeared first on VRFocus.