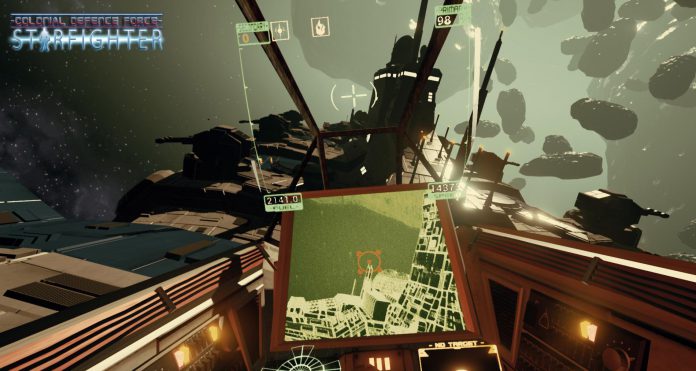 The latest space fighter  to come to virtual reality (VR) is CDF Starfighter has now made its way onto Steam as an Early Access title for both the HTC Vive and Oculus Rift head-mounted displays.

CDF Starfighter is a combative videogame based in space that has tried to echo the enjoyment of a 90s simulations such a Freelance with a single and multiplayer sci-fi adventure. The narrative of the title is that you are 350 years in the future with the human race nearly absolutely wiped out, and humanity’s only chance of survival falls on the lap of the player who will become a colonial defence force starfighter.

There is a list of features that make this videogame a more rounded experience, including six degrees of freedom (DOF), four single player game modes and multiplayer modes with challenges, simulations, scramble, and free flight, six different playable ships, and the fact that it has been developed for VR exclusively.

Currently in the Early Access version there are 11 free flight maps, a fully functional scramble mode, all challenged, and four simulations, and the first part of the single player campaign is to start tests Summer 2016.

The developers are keen to hear all of what the players have to say about the Early Access title after playing it: “We are a small indie studio with the potential for a AAA quality game, we would love to hear your ideas and feedback to help shape this game into something truly amazing.”

The developers expect this title to stay as an Early Access videogame until Fall 2016, and the full version will include full single and multiplayer content. The Early Access title is priced at $12.99 USD, which is reportedly 33% less than the full price release, which will come out to just over $17.

For the latest releases, news, and updates in the world of VR, make sure to check back with VRFocus.