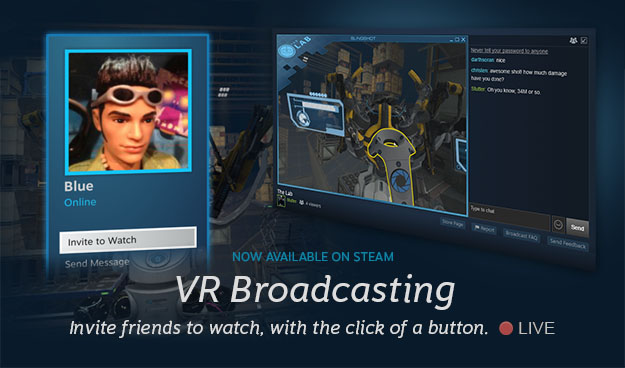 Almost from the beginning video games have been a shared experience. There was the inclusiveness of Pong on home computers, and even before that there was Tennis for Two – a game played on an oscilloscope. Things then moved on, with the arcade becoming a central social hub for children and young adults. Whilst gaming platforms have continued to develop, both in the home and portably so has how the experience is shared. Now of course, aided by the internet, it is on a global scale; through online connections, Let’s Plays, Twitch and Youtube live streams. With both technology and social participation evolving, it makes sense for both developers and publishers of virtual reality (VR) experiences to try and make sharing easier.

Valve, who are of course heavily involved in the HTC Vive head-mounted display (HMD), have now released an update to Steam’s broadcasting system allowing SteamVR titles to be shared and watched within the network for the first time. The process is the same as with standard games, with users inviting friends to watch via the dashboard, or accept a friend’s invitations via system notification.by pressing the System button when you receive the notification. You can find more information about the process here.

Other recent changes for VR games include Owlchemy Labs bringing a Twitch streaming related update to Job Simulator. VRFocus will continue to bring you updates on developments with streaming and VR broadcasting as it happens.