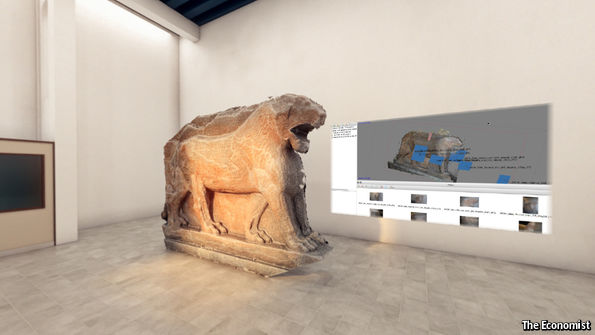 Virtual reality (VR) production specialist Visualise which has worked on projects for JCDecaux Airport UK and Thomas Cook Airlines has announced its latest project. RecoVR: Mosul is a VR experience reconstructing Mosul Museum in collaboration with The Economist and Rekrei, a non-profit group formerly known as Project Mosul.

Mosul Museum contained ancient artefacts previously destroyed by the militant group ISIS, in the Iraqi city of Mosul, and the teams are recreating it for future generations to learn from.

To do this Rekrei gathered together thousands of crowd-sourced images and archival data of the destroyed artefacts from around the world. The team and volunteers then used photogrammetry the images were combined together to create 3D models of the artefacts. Then Visualise developed a VR app re-creating the destroyed museum.

Tom Standage, Deputy Editor at The Economist commented: “In real life it’s no longer possible to visit the Mosul museum or see these destroyed artefacts. But RecoVR: Mosul lets you experience them in virtual reality, with The Economist as your museum guide, explaining the bigger picture. This is our first venture into VR, a medium which offers huge potential for new kinds of storytelling.”

While Henry Stuart, Founder & CEO of Visualise added: “Our objective was to take the principles of good VR (comfort, presence, and engagement) to redesign and conceptualise the content and app to create a comfortable experience for the viewer, whilst being sympathetic to the original project. We reviewed the existing experience ensuring we maintained the original 3D models of the artefacts, and took on the role to completely remodel the museum environments and create a photorealistic pre-rendered VR experience.”

The experience is part of The Economist’s “read, watch, listen” strategy making its insight and analysis available in multiple formats across the full range of digital platforms. Further VR experiences are planned, including a live-action VR film and a data-visualisation project which Visualise has also helped to produce.

RecoVR: Mosul is available to download for Android and iOS, used in conjunction with Google Cardboard or a similar head-mounted display (HMD). A Samsung Gear VR version is also planned.

VRFocus will continue its coverage of Visualise, reporting back with any new project updates.