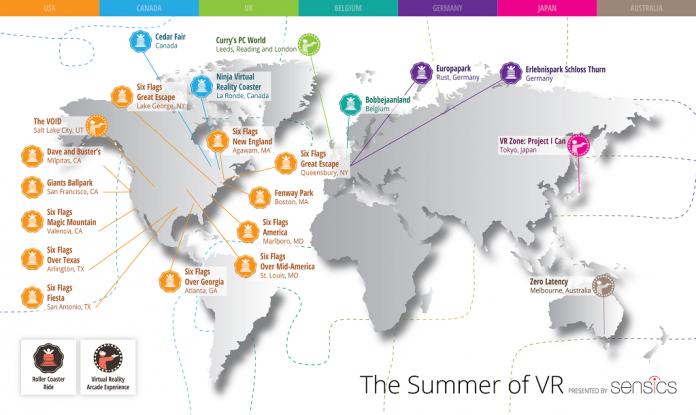 If by the end of 2016 you can find someone that hasn’t heard or seen some form of virtual reality (VR) then it would be surprising. PC and console-based head-mounted displays (HMDs), mobile headsets, 360-degree films, 360-degree pictures, demo stations in retail locations, the list goes on. And if your planning on heading to a theme park you’ll likely find VR there too. It’s why OSVR co-founder Sensics has now created a handy infographic of most of the places around the world that features a VR amusement ride of some sort.

As the image shows if you’re in the US or Canada you’re pretty well covered with Six Flags Entertainment Corp. installing various VR experiences across the region. VRFocus previously reported on the company announcing a Samsung Gear VR rollercoaster at La Ronde in Canada, and plans are underway to build a park featuring VR in Dubai.

Sensics has created this infographic to highlight how far the technology has come. The firm has been involved with VR for over a decade, seeing it evolve from a military training resource into a fully fledged consumer product. And Sensics has partnered with these theme parks in some way to enable more people to experience and enjoy VR together.

There’s 21 different destinations listed across the world and while most of them are rollercoaster based there’s a few that are pure arcade experiences such as Zero Latency in Australia and The VOID in Utah, US. These feature backpack PC’s linked to HMDs, giving players complete freedom inside their virtual worlds.

There’s many more places in the world that feature VR experiences so you shouldn’t have too far to look if you fancy exploring new virtual worlds. Keep reading VRFocus for all the latest news and announcements dedicated to VR.