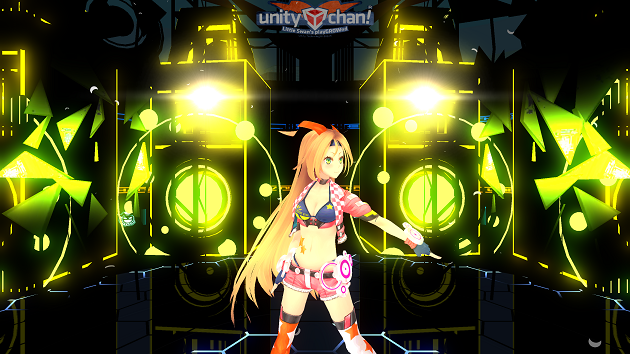 With all the virtual reality (VR) videogame experiences on the Samsung Gear VR mobile head-mounted display (HMD) that developers have released, like CCP Games’ Gunjack and Ustwo Games’ Land’s End, it can be nice to take a break, sit back and enjoy the myriad of videos available. From snowboarding to diving into the oceans, there’s bound to be something there for everyone. Now available via the Littlstar digital media content sharing app is Unity-chan! Candy Rock Star Live Stage!

The experience features Japanese manga style cartoon visuals, with a girl dancing and singing on a bright neon lit stage. The song being sung is Unite in the Sky by Kohaku Otori, a Unity-chan character and voicebank developed by Unity Technologies Japan G.K. She has been developed for “VOCALOID for Unity” and will be distributed by Unity Technologies Japan, using the VOCALOID4 engine and Unity. Her voice comes from Japanese voice actress, Kakumoto Asuka.

The Littlstar app which launched last year is free to download for the Gear VR HMD, and all the videos on the platform can be watched for free. Littlstar is an open platform for anyone producing immersive 360 degree content, showcasing work from filmmakers around the world as well as user-generated content.

VRFocus will continue to follow the latest news on Littlstar, reporting back any further additions to the app.