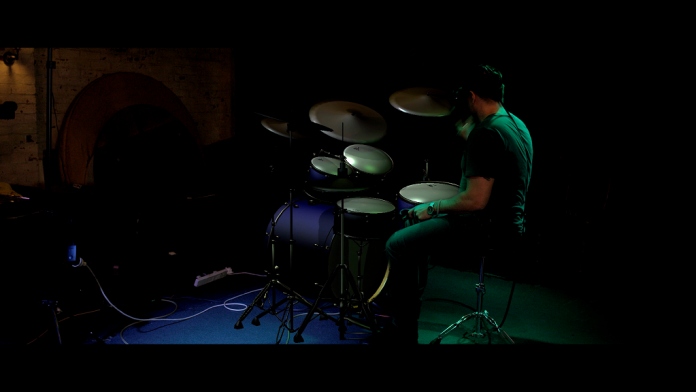 A couple of months ago Chroma Coda announced a musical virtual reality (VR) experience called The Music Room. The project isn’t a simplistic music synthesiser, rather a fully fledged music studio for the HTC Vive head-mounted display (HMD). And today VR fans who have a musical flair can buy The Music Room direct from the developers website.

The Music Room is a multi-instrument experience which includes drums, laser harp, pedal steel guitar and Chroma Coda’s own unique chord harp. The developer has collaborated with several drum companies such as Pearl, Ludwig, Sabian, Zildjian, DW and Gretsch. Through this partnership the experience not only produces a lifelike sound but all the drums and cymbals have been carefully scanned, thus creating a richer, more immersive looking experience.

Giving that extra air of authenticity, the surroundings haven’t been forgotten either. Rather than just a generic studio Chroma Coda has also scanned several real-world locations to play in, each with its own look and sound. Take in the ambiance of Melbourne, Australia’s Cherry Bar or the Bakehouse Studio, a rehearsal room used by Elvis Costello, Tool and Nick Cave. There’s also an art deco theatre, a stage used by The Beatles, and many more to play in.

Showcasing its professional attitude to music, The Music Room is a MIDI controller and can control any DAW, outputting traditional MIDI as well as the newer MPE standard. It also ships with Bitwig 8-track, a piece of software used for live performances and in the studio, designed to be low latency and high performance. Instruments can be sequenced, looped, presets changed, alter device settings and a whole lot more.

The Music Room is currently only available direct from Chroma Coda with support for HTC Vive, but the team does plan to release the experience through music retailers as well. Both Oculus Touch and PlayStation VR will get their own versions when they launch.

It’s certainly not cheap, at £98.99 GBP The Music Room is possibly the most expensive piece of software for HTC Vive. To see more of the experience The Music Room has its own YouTube channel with more demonstration videos.

VRFocus will continue its coverage of Chroma Coda, reporting back with any new announcements.