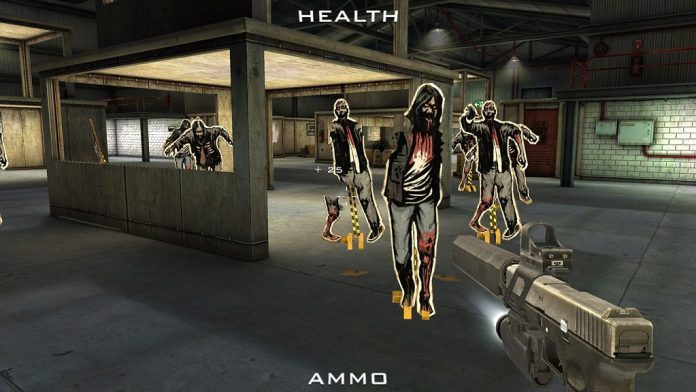 Samsung’s mobile head-mounted display (HMD) has had its latest influx of new content this week. Owners can test their geography knowledge with GeoGet by Evilport and now practice their shooting skills in Gun Club 3 VR.

Gun Club 3 VR takes into a high tech firing range where they can tryout all manner of weaponry in a variety of ranges. All the guns are based on real world weapons that can be custom fitted with hundreds of different attachments, from scopes and lasers to under slung grenade launchers. The selection menu will give players the option to improve accuracy, damage, capacity, speed, stability and more.

Then taking your loadout to the range there’ll be a multitude of scenarios to choose from, whether it’s rescuing a hostage, sniping or mowing down hordes of the undead. As missions are completed you’ll gain experience and XP, increasing your rank unlocking new rewards to utilise and money to spend on further upgrades, improving performance.

Created by Australian developer The Binary Mill, Gun Club 3 VR is the studio’s first foray into virtual reality (VR) on Gear VR. The team make mobile videogames for iOS and Android platforms, with Gun Club 3 originally launching on Android back in October 2013.

Gun Club 3 VR can be downloaded now through Oculus Store for $9.99 USD / £7.99 GBP and should be comfortable for most players to enjoy. VRFocus will continue its coverage of Gear VR. reporting back with all the latest releases.