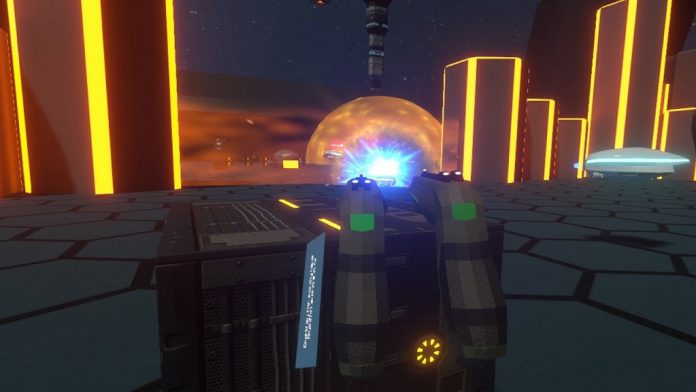 Titles such as Hover Junkers, Space Pirate Trainer and Jeeboman showcase how some developers are trialling different ways for first-person shooters (FPS) to work in virtual reality (VR). The genre is one of the most popular in standard videogames with the likes of Call of Duty, Battlefield and Doom, being three of the biggest names. But they don’t necessarily translate straight over to VR, with movement being the biggest issue. Coming to the HTC Vive head-mounted display (HMD) next month will be Orbital Strike: Arena, a team-based shooter that looks to bridge the gap.

Heading to Steam Early Access Orbital Strike: Arena is a multiplayer only shooting experience in a 3v3 MOBA-style game mode. Teams will attack enemy bases guarded by AI drones and turrets to destroy the drone production facilities and eventually the main headquarters, all whilst defending their own base.

Sandglass Games wants to develop Orbital Strike: Arena with heavy community support saying: “Orbital Strike: Arena is a multiplayer only shooter so there is no point in developing features, weapons, and game modes in a vacuum. We need the Communities help and feedback as early as possible to make this game a success. We also only use dedicated servers to bring the best multiplayer experience for players. With Early access, we’ll have access to the funding we need for these servers, new art assets, content and marketing to continue to bring new players into the game and sustain a fun multiplayer ecosystem.”

The team plans on the title being in Early Access for around 6 months during which the price will be increased as development continues and content added.

From early footage Orbital Strike: Arena will feature shields and pistols, with a teleport mechanic to move around the arena. While the teleport mechanic is widely used in VR videogames, it’s not often seen in FPS titles due to the frantic nature of the genre.

VRFocus will follow the development of Orbital Strike: Arena, reporting back with any further updates.