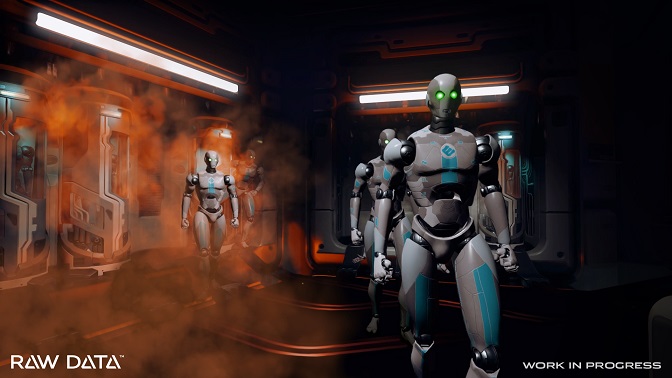 Active virtual reality (VR) has a lot of potential to engage users in exercise in innovative ways. While some are crafting virtual gyms and bike rides, some other experiences are somewhat unintentionally providing workouts through use of Room-Scale VR. Among these is Raw Data, the upcoming co-op first-person shooter (FPS) from the team at Survios. In fact the developer even notes that people play the demo for this frantic action fest and feel like they’ve just been for a ‘short workout’.

The team said as much in a recent interview with Epic Games: “Active VR gameplay that takes full advantage of room-scale VR is a huge focus for us,” it noted. “We aim to deliver on the promise of VR where users are not just visually immersed in our games but are also physically part of the world. In Raw Data, players utilize room-scale VR in order to rapidly aim and reload powerful guns, swing melee weapons, and hurl projectiles as enemies come at them from all angles in a full 360° game space. Gameplay is enhanced so much when you have to actually reach around your body to grab a weapon and then duck, spin and dodge to avoid enemy fire. People come out of our 15-minute demos feeling like they just did a short workout, but they can’t wait to play again.”

Developed using Epic Games’ Unreal Engine 4, Raw Data has players fighting off waves of robots using position-tracked controls to wield guns and swords. Survios currently plans to release the title in Early Access this summer for the HTC Vive. That said, it also looks to bring the experience to other VR platforms in the future.

Check back with VRFocus for the latest on Raw Data.