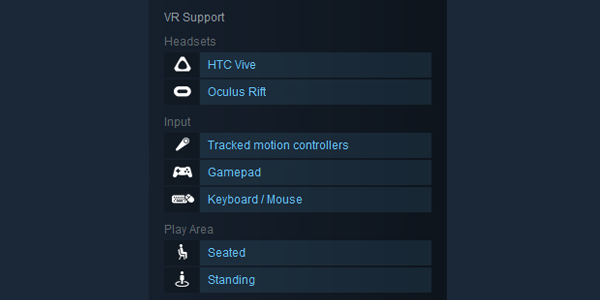 It’s not uncommon for online stores to list details and specifications for video games, but it isn’t something that can necessarily be expected of virtual reality (VR) as the consumer market is still relatively small. This may be the next trend for retailers as Valve has now incorporated a complete specification overview alongside product listings on their Steam Store for users to know what they need and should expect when playing the video game.

VR is something that Valve, who partnered with HTC to bring the HTC Vive and also made SteamVR a section to Steam, has worked hard to pioneer, and with the addition of the spec sidebar there is no sign of slowing down. Categories include, as you can see in the screenshot below taken from the Windlands page, which headsets the chosen video game supports, what hardware can be used with it, and what type of area the user will need while playing.This new feature has come within a few days of HTC’s announcement of the HTC Vive pricing, pre-order, and shipping information for worldwide consumers, as well as Valve’s very own performance testing tool to see if your PC is VR-ready.

For all the latest news and updates in the world of VR make sure to check back with VRFocus.