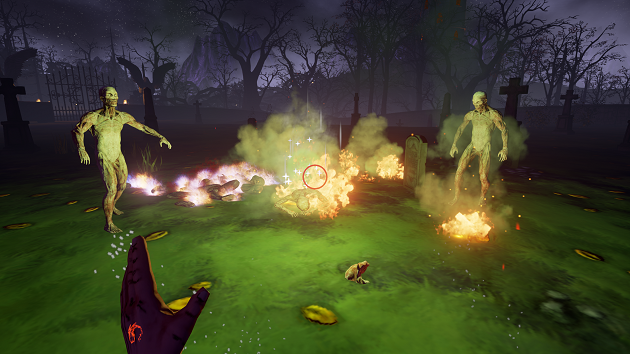 Over the weekend VRFocus has reported on lots of new details for virtual reality (VR) title Spellbound. The developers released a gameplay reactions video, showing players getting their hands on an alpha version of the videogame. The team also revealed a bunch of new screenshots, showcasing the spells and monsters that players would be facing. To add to all this Spellbound is now on Steam Greenlight.

If you’re unaware of Steam Greenlight, its a process where Steam’s massive community of gamers can vote on videogames they’d like to see on the platform. These titles are usually in development and the process is the principle way for developers to get their projects on the platform.

In Spellbound, players are cast as a wizard who has been dabbling with dark magic to bring his wife back from the dead, but he realises his spell has gone awry. While it worked, bringing his wife back to life, it also had the unforeseen effect of resurrecting all the dead creatures that inhabit the nearby graveyard.

The title will support both the Oculus Rift head-mounted display (HMD) and the Leap Motion hand-tracking controller, although players will be able to use the Xbox One controller that’s packaged with the headset. The developer has also indicated that it plans support for the HTC Vive and Oculus Touch in the future.

Spellbound is due to be released in Spring 2016, and VRFocus will continue to follow the latest updates on Spellbound, reporting back any further announcements.