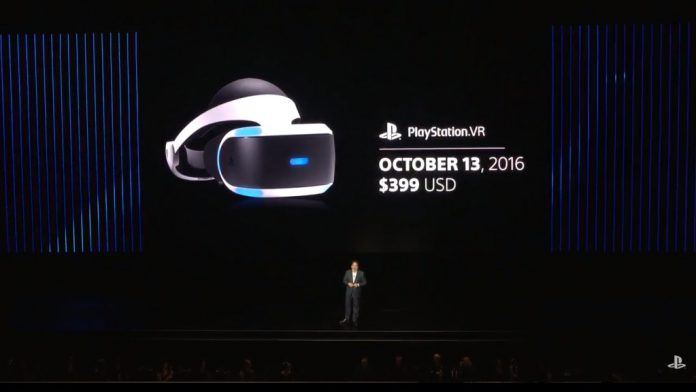 The Electronic Entertainment Expo (E3) in Los Angeles, California is due to commence tomorrow, but prior to the show opening there has been several press conferences taking place by some of the major videogame publishers and manufacturers. Electronic Arts (EA), Bethesda, Ubisoft and Microsoft have all had theirs and now it’s the turn of Sony Interactive Entertainment (SIE). Revealed today is the PlayStation VR launch date, 13th October 2016, by Shawn Layden Chairman of SIE Worldwide Studios.

It’s been a long time coming but the date now confirms what VRFocus initially reported on earlier this week, when Artefacts Studios and Microids announced Moto Racer 4  would be coming to PlayStation 4, Xbox One, PC and Mac.

SIE hasn’t said if the announcement is for the US or worldwide, but as pre-orders for the head-mounted display (HMD) were worldwide it’s likely the launch date is.

With PlayStation VR official launch date confirmed there’s only 4 months to go. At Game Developers Conference (GDC) in March 2016 SIE revealed the price $399 USD, £349 GBP, $550 AU, $549.99 CAD and launched pre-orders via sites such as Amazon and GAME, which initially sold out very quickly.

As SIE releases further details on PlayStation VR keep reading VRFocus for all the latest VR news from E3.