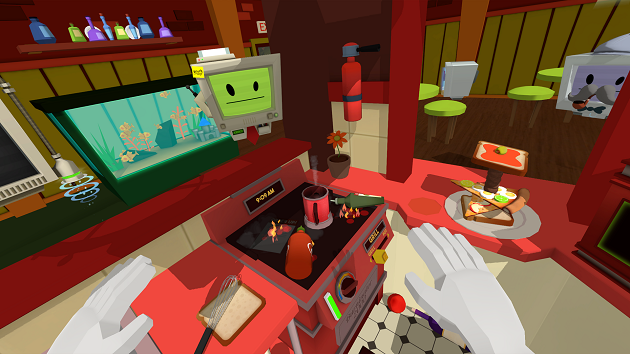 Now, I don’t want to be a party pooper, but this is something we all need to consider before it’s too late. The production of slapstick virtual reality (VR) titles needs to slow down substantially to allow it to mature graciously.

There are many loved VR titles that are out right now that fill this category, one of the more popular being Owlchemy Labs’s Job Simulator. This was one of the HTC Vive launch titles that was included as a bundled game, and at the time it was for great reason. It’s a good quality game that puts a smile on your face, and there’s no chance that anyone could get confused by either the gameplay or humour. But it comes to a point where we have had enough introductory titles created, and that is all that these slapstick games are.

Job Simulator would have been fine, if it wasn’t for the almost identical looking title from Rewind Studios, Pane In The Glass. This looks as though it could have easily been another job on the previously mentioned title. What we need to ask is how long will we go until we can move on from doing mundane activities and thinking they’re hilariously fun just because we can throw a sausage around?

VR is worth so much more than reducing the average adult to that of a curious toddler. Why do we need to dumb down this incredible ability of transporting into new worlds with the knowledge that we could pretty much fulfill what we have always wanted to do? Instead, we are throwing donuts around, clean windows, and generally acting like children.

But still, there is a strange pull towards it that we cannot help but feel. My latest episode was when I came across Amazing Frog? when I was looking through the Steam Store front page. I had no idea it was being developed for VR as well as for regular PC gaming enjoyment, and after watching through the first two lengthy videos I came to the preview of the Oculus Rift version. This is when I caught myself getting excited for another title that will most probably end up being a one-time play to mess around with until I’m bored of it. 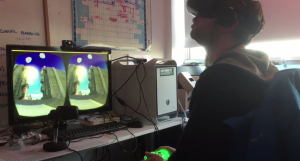 Perhaps what is needed from these titles is some sort of progression past the novelty of picking up objects and throwing them around with no consequence. Yes, the slapstick, silly nature of these games is what gives them life, but maybe if it is paired with something of more substance would it be more sustainable as a go to genre.

Certainly, if a title like Amazing Frog? had a few boss battles, then we would be talking. However, we will continue to fall into the trap of convincing ourselves that these title have real weight to them until we move on to something better.