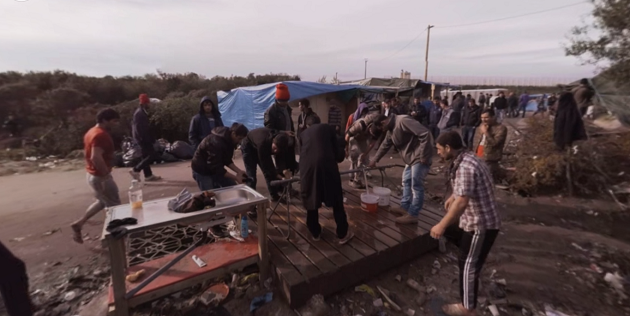 American media company and virtual reality (VR) studio RYOT has announced that it has begun a new joint initiative with global news agency, The Associated Press, to produce a series of stories in VR. The collaborations first VR story launches with “Seeking Home: Life Inside the Calais Migrant Camp.”

The VR documentary transports viewers to the front line of the largest migrant and refugee camp in northern France.The audience meet migrants and refugees as they prepare for the final leg of their dangerous journey: to climb aboard a moving freight train bound for England across the English Channel to start a new life in the UK. Migrants and refugees have turned the rugged landscape into a makeshift town with churches, mosques, restaurants, and even a beauty salon. With winter approaching, local authorities struggle to cope with the influx as the camp grows more permanent with each day. Through the use of 360 degree filmmaking, the film brings audiences into the heart of the camp for a close-up view of life inside the camp.

“We are very excited about this collaboration,” said Bryn Mooser, Co-Founder of RYOT News in a statement. “The Associated Press has been our preferred news provider since our launch three years ago, and now, together with VR, we have the opportunity to reimagine the way we interact with the news and blaze new trails together in immersive journalism.”

“The VR space has great potential for news innovation, and we’re eager to explore that space with RYOT,” adds Francesco Marconi, AP’s manager of strategy.

The experience will be available for free through the RYOT VR mobile app on iOS and Android. Additionally, it will be distributed via Oculus Share and YouTube.

VRFocus will continue to bring you all the latest news on RYOT and its VR projects as details are announced.

The post RYOT Announces Collaboration with The Associated Press on VR Stories appeared first on VRFocus.