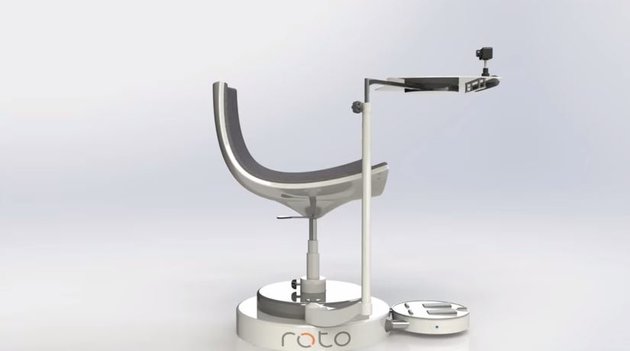 Virtual reality (VR) company Roto VR launched an unsuccessful Kickstarter crowd funding campaign earlier this year for a rotating chair for use in VR. The chair allowed users to spin around helping reduce motion sickness within experiences. Now the company has announced a new investment deal to finally bring the product to market. In a successful round of equity funding led by Jensons Solutions, Roto VR has now raised $300,000 USD, and is targeting May 2016 as the launch date for the Roto VR chair.

The Roto has been designed from the ground up for VR users, providing the ability to physically rotates players in the real world, while matching their movements in the virtual one. This type of accessory aims to add a greater sense of immersion and feel of VR experiences, whilst also reducing the possibility of motion sickness which can occur in some titles.

“We’re so excited to see our vision for Roto become a reality and to offer developers and consumers our vision of what the seated VR experience should be” said Elliott Myers, CEO at Roto VR in a statement. “It’s particularly exciting to launch alongside 1st party HMDs from May, 2016. Roto provides the ultimate in seated VR experiences, just kick back and let Roto do all the hard work.”

Roto VR plans to launch an official website soon which will have further details on the chair as well as pre-order registrations. Final pricing has yet to be revealed, although it maybe similar to the Kickstarter backer pricing.

VRFocus will continue to follow the latest updates from Roto VR closely, reporting back with any further announcements.

The post Roto VR Aims to Launch in May 2016 After Securing investment deal appeared first on VRFocus.