Perhaps one of the most interesting areas of virtual reality (VR) right now are experiences that don’t quite fit into any one category. While a VR title might boast all the interactivity of a first-person videogame, for example, its focus on story and observing the world around you might invite you to label it as just as much a film than something to be played. Indie developer Buffalo Vision is working on such an experience in Irrational Exuberance, a wholly unique title for the HRC Vive head-mounted display (HMD).

Irrational Exuberance was recently listed as one of the pieces set to appear at next year’s Sundance Film Festival, which goes some way to demonstrating that this space odyssey isn’t a straight up videogame despite its use of SteamVR features such as Room Scale user tracking and position tracked controllers. Recently VRFocus got to talk with the studio’s Ben Vance about the title’s origins, the intriguing collaboration with TheBluVR: Encounter developer Wevr and more. Said interview is below.

VRFocus: Can you start about by explaining the premise behind Irrational Exuberance and what you hope to achieve with the title?

Ben Vance (BV): Irrational Exuberance is a surreal space odyssey in the vein of movies like 2001, Solaris, or Interstellar. It is an experiment in what is possible in room-scale VR. It is designed to maximize presence by including your sense of sight, touch, and hearing, and whole-body movement. Every moment is you, the player, figuring out and understanding a far-off corner of space. A place that is beautiful, consistent, yet fantastic and surprising.

I want to build a place that I truly want to be. But I also hope that this project can show what is possible in VR without relying on tropes from other media. While it clearly has strong connections to games and film, VR is truly something else. There are dozens of challenges making VR at this early stage, from technical to aesthetic, but it’s really important that we strive to explore it’s potential without over-reliance on designs meant for traditional screens.

VRFocus: Irrational Exuberance seemed to start out as a much smaller project. Can you explain the evolution of the title from its early days?

BV: Irrational Exuberance has evolved very organically from the beginning. It started while I was learning Unity and experimenting with 3d movement in a novel way. That’s all it was – no setting, art, or concept other than this mechanic.

Two things happened shortly after. I agreed to make a game for the LA Game Space Kickstarter, and I heard that Oculus and IndieCade were partnering up at E3 2013 and were looking for games to show on the Oculus Rift DK1. I had recently experienced the DK1 and saw potential but there was very little quality software at the time. I realized my prototype might be a good fit so offered to show and got to work. Going into E3, I was terrified though. I had a scant 10 minutes of gameplay and it was still super rough. Fortunately, short experiences were ideal on DK1 and overall, reactions were ridiculously positive.

In the fall, I shipped what I called an “alpha” version to LAGS backers, which ended up being a massive effort for a one-person studio, but a good experience. While I had liked the DK1 and had built a small project for it, there were two big problems. The first: VR input didn’t have any real solutions at the time, so I compromised and designed for FPS-style navigation on a gamepad. The second: the DK1 made most people feel ill after a short time, including myself, and I didn’t know if that was a solvable problem.

Fast forward to January 2014, I decided to attend Steam’s Dev Days and was invited to check out Valve’s prototype VR hardware that would eventually evolve into the HTC Vive. The Valve demo was about 30 minutes and quite unexpectedly, felt completely natural, even comfortable. It was bizarre. At that point it was clear that VR would be real. And sooner or later it would be widespread.

VRFocus: At what point did you decide that the title would be a good fit for HTC Vive and SteamVR?

BV: When I experienced the Valve prototype, I was so impressed I went the other direction — I decided to rework IE’s design to best use the HTC Vive and SteamVR. It has not been easy, but it has been very rewarding. I’ve thrown out almost all of the previous mechanics. The aesthetic and tone are the same, but everything else has been re-designed. Robust head tracking is incredible, and super high-fidelity hand tracking changes everything. In fact, it took me some time to realize this. I had been using the HTC Vive for months and acclimated to it’s controllers when I tried an Oculus VR experience with gorgeous graphics and sound, but lacked any hand tracking. It was beautiful but flat — there was nothing I could do to affect the situation. Only by not being able to use my hands did I realize their importance.

Fortunately, my goals for IE have been mostly aesthetic. Even the original mechanic that led to the creation of IE has been jettisoned, because it just doesn’t fit with standing room-scale VR. Fortunately, it turns out there are tons of fascinating possibilities and design ideas to explore in VR and in deep space. 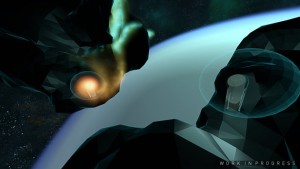 VRFocus: How has the partnership with Wevr helped your work?

BV: Wevr has been great. Everyone there is really passionate about the medium, really understanding it, and making it happen. They’ve provided feedback on design and work in progress, access to prototype hardware, a place to work, opportunities to show and helped submit to festivals. They’ve always been supportive, through thick and thin, and I’m much more sane because of it.

VRFocus: How big of an experience is this? Is it something players can expect to see through in one sitting?

BV: I am aiming for the core experience to take an hour or two, but it really depends on what you are looking for and play style. There are deeper aspects of creativity and observation to explore which should support much longer play. It could be in one session, or multiple. But even a replay might result in a different experience!

VRFocus: You’ve made the selection for the New Frontier section of Sundance 2015. Is Irrational Exuberance, in your mind, a video game, or does this selection prove it to be something different?

BV: It really depends on your definition of video game. I have a pretty broad definition, so I would say yes. But I’ve always been interested in the experience of digital places and the feelings that game worlds can evoke.

It is highly interactive and full of discovery. It must be understood directly though the senses. You begin by simply grasping your abilities, and as these unfold, the search reveals the nature of the universe and the impact of your existence within it.

VRFocus: Is the Oculus Rift version of the title still planned and could it also come to PlayStation VR?

BV: Both platforms are a definite possibility! It really depends on how closely the capabilities match the Vive. I would love to support all the major platforms, and I think both PS Move controllers and Oculus Touch could be fun to work with. But it really depends on tracking volume and quality. Irrational Exuberance has gone from a seated, gamepad-oriented experience to a standing, active experience, and I don’t think it can go back!