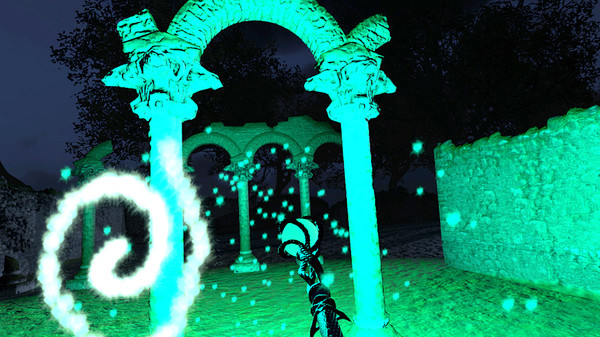 Though the majority of videogame news this week is coming to you from the Electronic Entertainment Expo (E3) currently happening in Los Angeles, where we’re getting a glimpse of games coming for the rest of this year and beyond, there are still exciting virtual reality titles preparing to launch in the immediate future for you can get your hands on. One such title is Left-Hand Path, coming to Steam Early Access on June 20th for the HTC Vive headset.

Created by Hugh Hancock, Left-Hand Path is a room scale VR role playing game (RPG) in which players take up the role of a wizard, casting spells and performing magical rituals in a world heavily inspired by the Dark Souls universe. The Dark Souls inspiration isn’t just aesthetic either, with the developer stating that the game certainly isn’t easy, though it’s not unfair either.

When the videogame begins, players will find themselves waking up in a dark castle filled with dangerous creatures, arcane gestures to learn, and a dark and terrible secret to uncover. Left-Hand Path is being released as a room scale experience only so there’s no sitting down in this one; players will have to use their whole bodies to cast spells, dodge enemies, and explore. The title is a fully-fleshed out and fully voice acted RPG experience that will offer players over 3 hours of playtime when it’s released in Early Access with 8 to 10 hours planned for the final version.

Hancock says that he estimates the title will be in Early Access for 3 to 4 months, though development has run faster than he initially expected.

When it’s complete, the final version of the game will be much longer than the Early Access version, with three additional areas to explore, 10 to 15 more spells to discover and cast, more enemies, and perhaps an inventory to store items.

Left-Hand Path will be discounted for Early Access customers, “the cheapest it will ever be” according to the developer, with prices certain to rise as more content is added.

As development progresses on Left-Hand Path, VRFocus will bring you the latest news.