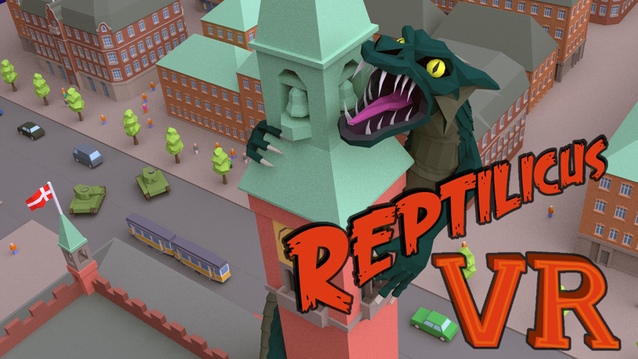 Last month VRFocus reported on the launch of a Kickstarter crowd-funding campaign for a new wireless motion capture suit named Salto. Creator Rokoko Electronics was looking for a total of $100,000 USD in order to bring its suit, which can be used with virtual reality (VR) technology, to market. The campaign has now been passed and Rokoko Electronics has unveiled a partnership with indie developer Triband to produce one of the first full VR videogames to use its tech named Reptilicus VR.

If that name sounds familiar it’s because Reptilicus VR is indeed based off of the infamous 1963 movie, which the developers have secured the rights to. The original piece followed the titular Godzilla-esque monster through Copenhagen as it ruined the city, going on to earn cult status among many movie fans. This videogame allows players to step into the role of the Reptilicus themselves and let loose on the city using full body motion capture to swat away cars and smash into buildings.

“Reptilicus VR is delivered as a surprise perk to all our backers of SALTO,” Rokoko Electronics revealed in a new Kickstarter update post. “Reptilicus VR and SALTO demonstrate exactly how cool and fun it is to integrate the Salto suit in the VR experience. The police shoot at you from all angles, while you are throwing around every tree, house or human in Copenhagen – with your own arms and legs!” The first video of the title in action – complete with a commentary from Triband itself – can be seen below.

VRFocus will continue to follow both Salto and Reptilicus VR, reporting back with the latest updates on their progress.