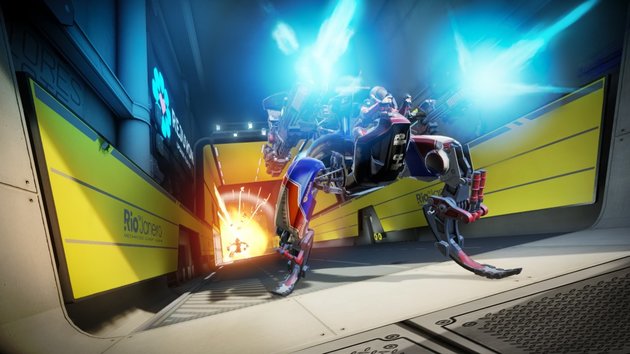 Guerrilla Cambridge is one of the first developers to be tackling the lofty challenge of the virtual reality (VR) first-person shooter (FPS). The Sony Computer Entertainment (SCE) owned studio is currently working on a multiplayer shooter named RIGS: Mechanised Combat League for the PlayStation VR head-mounted display (HMD) on PlayStation 4. The arena-based mech combat experience takes a sports-orientated approach, playing out in championships that could be broadcast on TV. As such, the title doesn’t feel especially violent, which was a conscious decision by the developer.

RIGS: Mechanised Combat League director Piers Jackson said as much in an SCE panel dedicated to VR at this week’s Paris Games Week (PGW) show, as reported by Digital Spy. “VR violence is more intense [than traditional gaming],” said Jackson, “You feel it, it will be more impactful to people.”

In fact, when playing, combatants will find that they don’t actually die; they’re just ejected out of their destroyed mechs. “We made a design choice very early on not to make players confront their own deaths,” Jackson explained. “You don’t die in RIGS, you eject. It’s a sports game, so it makes sense. You wouldn’t want a Formula 1 driver to die over and over again in a race.”

RIGS: Mechanised Combat League is at PGW over the course of the next few days, showcasing a brand new level set in Dubai. The title features different classes of mech (named Rigs) and a number of game modes. The only one of these revealed so far is Power Slam, in which players must activate an overdrive mode and then head towards a goal in a map, jumping through it to score a point. It’s not clear when the title will release, although PlayStation VR itself isn’t due until the first half of 2016.

VRFocus will continue to follow RIGS: Mechanised Combat League closely, reporting back with the latest updates on its progress.

The post RIGS Designed So Players Don’t ‘confront their own deaths’ in PlayStation VR appeared first on VRFocus.