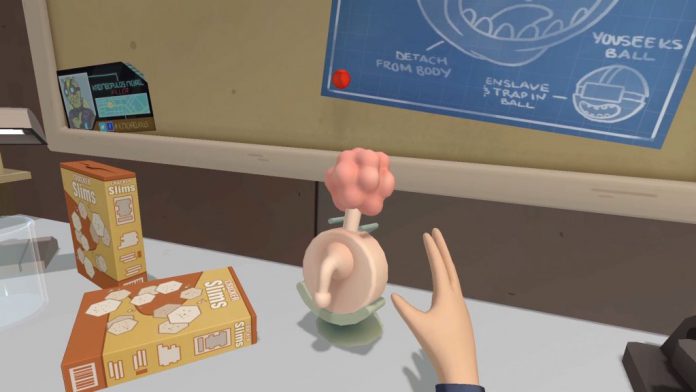 Owlchemy Labs announced the appearance of Rick and Morty Simulation: Virtual Rick-ality on Steam for HTC Vive today. However, there isn’t a date listed for its official release, so there is still a wait to be had for all those Rick and Morty fans.

This title captures the ridiculousness of the original cartoon in VR as players play as a orty clone, exploring Rick’s garage and alien worlds. Here is how it is described as on its Steam page: “Experience life as an exact replica of Morty and all the trauma that comes with it. Step through portals to strange worlds and help Rick collect bizarre specimens for his experiments. Use your hands to pick up and play with objects in an almost completely interactable, 3D space. Follow Rick’s directions to solve puzzles and complete missions in this fully voice acted adventure.”

This full title will feature a fully voice acted Rick and Morty adventure, where players can “probe, prod, throw, and smash iconic items like the Plumbus” as well as teleport around rooms to find hidden objects. The most important might be that there are real fake doors.

VRFocus will keep you up to date on the latest developments for Rick and Morty Simulation: Virtual Rick-ality, but until then make sure to check back for all the news, updates, and features in the world of VR.