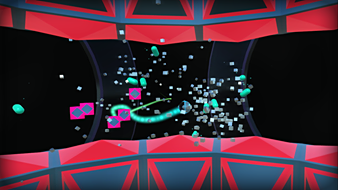 Vektron Revenge originally launched on Samsung Gear VR head-mounted display (HMD) in 2015, and for the mobile device it’s a fun, quirky title. The problem with porting a videogame from the Gear VR onto the Oculus Rift is, was it worth it? Some do make the transition, feeling refreshed and improved making use of the extra hardware, while others don’t hit the mark. Unlike CCP Games’ Gunjack, Vektron Revenge falls into the latter category.

Based on classic coin-op shooters, Vektron Revenge from developer Ludovic Texier puts you in control of an orb that you control with your head movements. Firing is automatic, projectiles are emitted in four directions and you have to destroy each in coming wave of enemies simply by avoiding them. Apart from starting the videogame and restarting you may as well put the controller down.

Vektron Revenge wants to be Geometry Wars for virtual reality (VR) but it just doesn’t have the depth. Making the orb dart around the game area is great for a while, picking up the green pills that enemies drop to increase your score, then at certain points you’ll be given a Revenge power-up that increases your attacks. This lasts for a few seconds before reverting back to normal. Waves are made more complicated by giant red obstacles that need to be avoided, fly into one and that’s one of your three lives gone. These can be used to bunch enemies together giving you more room to breath by making them easier to hit.

There are six distinct enemy classes, each with their own attributed point allocation. At the entry level there’s Spike for 160 points rising up to Vultor at 500 points. Naturally the more points you accumulate the higher up the leaderboards you go, which is the only real incentive to keep playing; compete against mates is what it’s all about.

The problem between the two versions is that they’re almost identical, meaning was there much point bringing Vektron Revenge over to Oculus Rift when it worked so well on Gear VR? Another issue is price, Vektron Revenge on Gear VR is $2.99 USD, while Oculus VR has listed the Rift version for $9.99. Its not expensive but why the price increase for essentially the same title? If there has been more added – achievements, enemies, power-ups – then it would be understandable, but that’s not the case.

If you’re looking for a 10-minute time killer then Vektron Revenge is great for a quick blast. Other than that there’s not really a lot else to it, and you’ll find yourself looking for something that can really grip your attention. And even at launch, on the Oculus Rift there’s plenty to choose from.