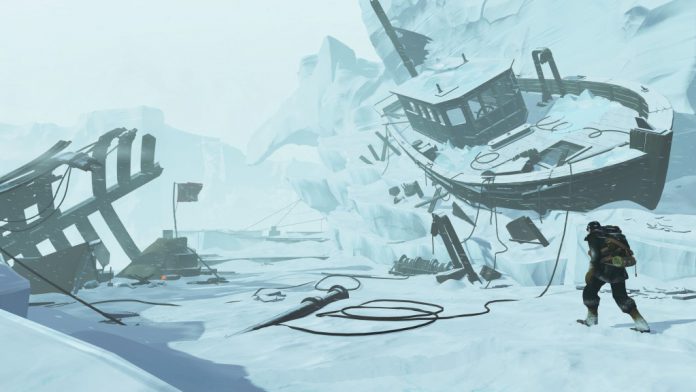 Insomniac Games’ first foray into virtual reality (VR) has seen some significant changes since its first unveiling. As the best-in-class VR developers will often say, what they had originally envisioned may not have been the best use of the new medium or, worse still, may actually have not worked at all. The smartest teams will go back to the drawing board, iterating and reshaping their initial idea into something new. Thankfully, this is exactly what Insomniac Games has done with Edge of Nowhere.

Cast in the role of an explorer by the name of Victor, the player is on a journey to find his fiancée, a fellow scientist, who has gone on an expedition to a vast unknown pole. When the leader of her expedition missed a check-in it was Victor’s only instinct to board the first search-and-rescue helicopter: a decision that leads him down the same dark path as the rest of the explorers.

Edge of Nowhere‘s psychological horror is based on the torment in Victor’s own mind and some previously undiscovered alien creatures. Its delivery is somewhat ham-fisted at times; while props must be given to Insomniac Games for choosing a protagonist that goes against the grain of the modern videogame industry’s output, in practice he feels just as prepared for action as any Marcus Fenix or Alex Mercer. A brief moment of personal anguish upon his first kill is soon forgotten as he begins hacking apart small spider-like creatures with a pick axe.

The core concept of Edge of Nowhere is close to a very linear action videogame. One of the most traditionally ‘videogame’ videogame titles to have yet launched in VR, the player will partake in platform sequences, combat, stealth action and a small amount of exploration as their hand is held throughout most of the adventure. That’s not to say Edge of Nowhere isn’t an enjoyable ride – for all its flaws, it is most certainly an entertaining experience throughout it’s half-dozen hours of gameplay – however it is clear throughout that Insomniac Games has been careful not to push the envelope too far.

The pacing of the experience is well balanced but action set-pieces are far from as bombastic as its console peers. Edge of Nowhere isn’t quite up to the standard of Uncharted or the recent Tomb Raider reboot – arguably its most immediate influences – in the delivery of these mechanics, but where it does excel is in atmosphere. The greatest use of VR presented here is in that of immersion: Edge of Nowhere is a VR exclusive title because it has been born with the idea of working within VR. There are a many number of things that a head-mounted display (HMD) can offer that a traditional 2D monitor or television simply can’t and Edge of Nowhere makes good use of these for the singular purpose of immersing the player in its environments. 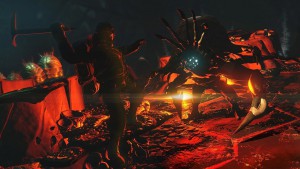 Edge of Nowhere benefits from what are undoubtedly the highest production values yet seen in modern VR. From the crunching of snow underfoot and the footprints left behind to the first-person storytelling that drives the belief you are in this dire situation, despite the fact that all action sequences are conducted in third-person. The pre-set camera angles are structured in a similar fashion to Gunfire Games’ Chronos, yet a different experience is earned through the fact that camera follows directly behind the protagonist: the player has direct control of their own viewpoint in 360 degrees a few feet behind their on-screen avatar, opposed to at the edge of an area as with Chronos. Insomniac Games has a reputation for achieving high standards of visual and aural design, and even though Edge of Nowhere is their debut VR title, it does not disappoint in this regard.

There are some minor annoyances, such as the inventive decision for Victor’s headlamp to follow the player’s viewpoint but Victor himself not animated to represent this on-screen, while much of the vastness of Edge of Nowhere’s environments are little more than simple repetition of what is seen in the opening few minutes of any specific area. However, given the quality in delivery of the majority of the experience these issues can easily be overlooked in favour of the greater good: a VR videogame that manages to push familiar mechanics harder than any have before it.

It may sound harsh to consider Edge of Nowhere a prototype for greater things to come, but in truth that’s exactly what it is. A bold statement for how third-person action videogames will play out in VR laying the groundwork for other developers to follow, Insomniac Games has ensured that a cohesive and thoroughly enjoyable experience has been delivered. Taking a few steps back from the modern renditions of the genre’s leading lights yet adding complexity with the benefit of being played solely through a HMD, Edge of Nowhere is a videogame that most every VR early adopter should experience as a taste of what is undoubtedly yet to come.