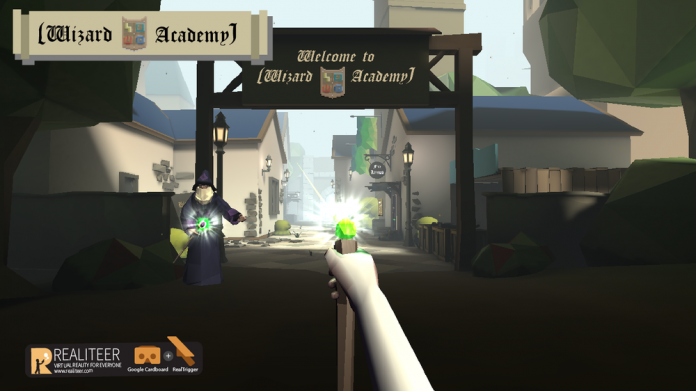 Virtual reality (VR) studio Realiteer has announced today that it will give away free downloads of Wizard Academy, a mobile VR app featuring hand and body motion control, to celebrate Thanksgiving. As well as the free giveaway Realiteer will be launching a social media contest on Facebook for the holidays.

For its holiday contest, Realiteer will select the top five players who gain the highest WQ (wizard quotient) from Facebook by sharing posts using #WizardAcademy. Share transcripts of games and DIY wands with #RealControl and #WizardAcademy for a chance to win a $100 USD Amazon gift card. The Facebook contest will run until 31st December 2015.

Wizard Academy is an immersive educational game transporting players into a magical world where they can cast powerful spells, train their mind, and improve their memory with puzzles, problem solving games, and brainteasers. The videogame is compatible with Google Cardboard and other similar head-mounted displays (HMDs), including Realiteer’s own DIY VR headset. There’s also a downloadable kit to build your own RealTrigger control system via the developers website, which VRFocus reported on earlier this month. Wizard Academy is available to download for free on Android and iOS stores today.

“We want to encourage families and friends to play together during this holiday season,” said Fangwei Lee, founder and CEO of Realiteer in a statement. “Playing games is a popular activity for holiday gatherings and why not make it more exciting with VR? We’ve developed the Wizard Academy game where players of any age can have fun and learn at the same time.”

VRFocus will continue to bring you all the latest news on Realiteer’s VR projects as further announcements are made.