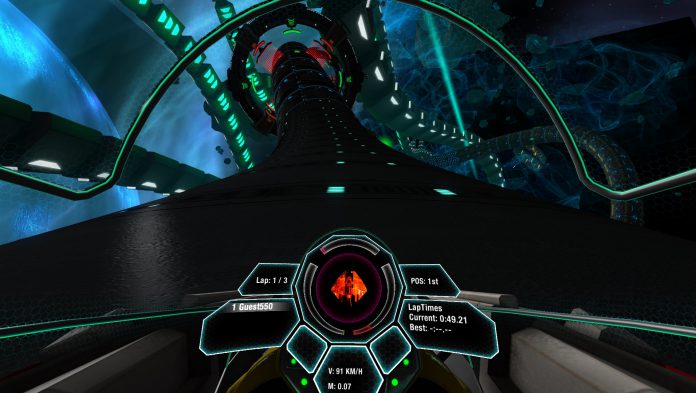 Radial-G has been doing anything but coasting since the latest release of its official trailer, and it is evident from the 10-point list of what is to come over the next year from Tammeka Games which appears to flesh out the virtual reality (VR) racer more than ever.

The list isn’t as detailed as some may like, but in the latest blog post by a Radial-G dev there is a plan for the next year that will give those who have the game and those who may be thinking about purchasing it a good idea of where it will be heading. Some of what we know in more detail is that there will be the addition of weapons and power-ups, and have been said to be “the first major update on the list” that the studio will be developing. The other most detailed addition are the new tracks and environments, and the dev shares the studio’s thoughts and ideas that are there will be flat tracks and planet-based environments but they will come in a way that will keep the “sim sickness” at its lowest – which means no horizons.

Other points that feature on the list with minimal detail are the redesign of the VR homescreen, a revamp of the VR Social Hub, an addition of a storymode to give the character and videogame substance, and the addition of a rewards system. Points which lacked in any detail whatsoever were multiplayer updates, personal VR space, addition of ships, and “Top Secret Awesome Stuff”.

As previously stated these updates will progressively be applied within the next year. The dev answered some of the more obvious questions that come along with why the studio cannot give a definite answer as to when the updates will arrive: “Why the uncertainty you may ask – well the support we’ve received has enabled us to employ more developers and so we’ve gone from four guys who know every line of code, every 3D asset and mechanic, to needing to on-board additional team members. Therefore, a doubling of the development team does not mean double the output, at least not initially… and it’s difficult to predict when this will become the case.”

For the latest updates and news in the world of VR stay with VRFocus.