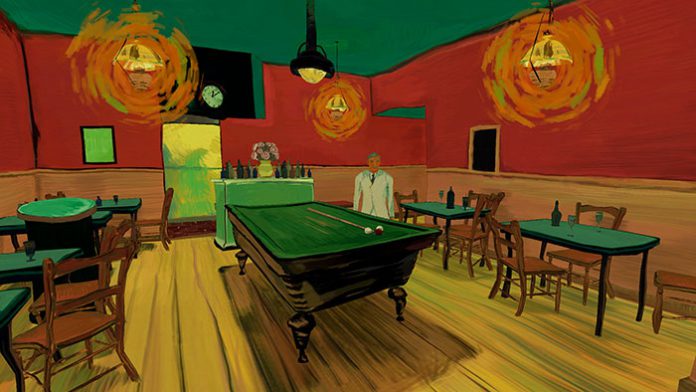 Early 2015 was an exciting time to be a Gear VR owner. Not only did you have access to a device that wasn’t truly ‘consumer ready’, but Oculus VR ran a development jam for the kit that saw hundreds of studios flock to create innovative, fascinating experiences for the mobile-based virtual reality (VR) head-mounted display (HMD). In the end, there could only be a handful of winners, and the grand prize in the experiences track of the jam went to The Night Cafe: An Immersive Tribute to Vincent van Gogh. Taking a peek inside this free software, it’s easy to see why.

Developed by Borrowed Light Studios and available from the Oculus Concepts Store, The Night Cafe puts you inside the titular 1888 painting from the seminal artist. Not only that, but this experimental project expands on that original piece with new areas that serve to complement the work with music and some easter eggs for fans.

A gentle soundtrack played on a piano is the first thing you’re introduced to before the original painting is shown, giving you a moment to appreciate what you’re actually about to enter. The painting then fades and, remarkably, you find yourself in it. You can use the Gear VR’s touchpad to walk around that room with its many chairs and tables faithfully recreated using a gorgeous hand-painted art style that replicates the piece perfectly. The snooker table really stands out here, tempting you to run your hand along it as you casually drift through the area.

Brilliantly, the figure depicted in the original remains undisturbed by your presence, and won’t react as you walk up beside him and poke your face around, staggered by how this figure has been brought to life. It gives the piece a preserved tone, as you feel like you’re walking through history itself, which, of course, you are in a sense.

It’s possible to explore beyond, though, and heading round the corner you’ll find the origin of the piano music. Atop the instrument sits a vase of sunflowers that will look familiar to any fan of van Gogh’s work. Remarkably, the man himself can also be found unassumingly wandering back and forth between a chair and window, casually returning to his pipe every few minutes. Again, he’s unaware of your presence, allowing for you to simply sit and admire.

This is where VR strikes a true chord in terms of relaxation. It’s not on virtual beaches where you long for the sun to stroke your cheek or around campfires that lack marshmallows, but in exploring genuinely new ideas and paying tribute to the incredible work that’s come long before this technology was made possible. The Night Cafe pays nothing but the utmost respect to the work on which it is based and showcases a use for VR than many wouldn’t have thought of. It’s completely deserving of that $100,000 USD prize and one of the first things you should check out on your Gear VR. All eyes are on what Borrowed Light Studios does next.