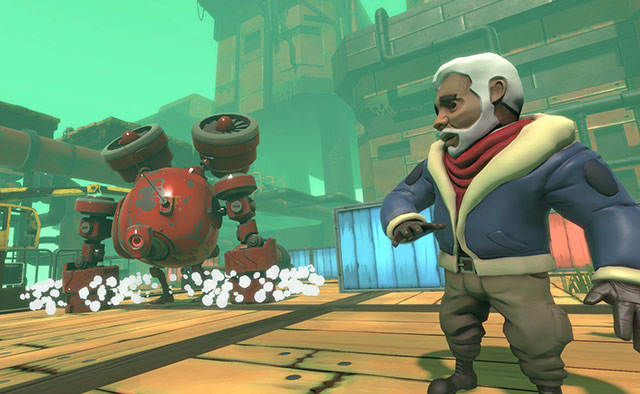 Uber Entertainment’s Wayward Sky has had a seemingly turbulent path to release thus far, with a Samsung Gear VR version (known as Ikarus) cancelled in favour of a PlayStation VR exclusive release. However, in the preview build that the company has presented the videogame appears anything but weakened by this 11th-hour decision, as Wayward Sky remains a hugely enticing virtual reality (VR) proposition.

For those unaware of the core gameplay mechanics of Wayward Sky, it’s a third-person experience that combines platform elements with puzzle solving. There’s a crate blocking your path? Enter a crane and transition to first-person, using the controls to reposition the crane and lift the crate out of the way. Later, a series of enemies moving in formation may encumber your progress, so stealth is required to get past them. Further still, a chicken can become your best friend as you venture along a high-speed, high-altitude railway.

Uber Entertainment has been experimenting with VR for some time (as the studios’ Planetary Annihilation technical demonstration for HTC Vive will attest) and in discussion with VRFocus is not afraid to discuss the many roadblocks the team have encountered on the way to developing Wayward Sky as a consumer product. As with many developers, things which were thought to naturally be accommodated by VR have proven unwieldy, whilst design thought to have been uncomfortable has resulted in an interesting addition to the videogame when iterated upon. This is the crux of Wayward Sky‘s unique presentation of two well worn genres: it’s forcibly inventing due to the nature of modern VR.

The transition between third- and first-person elements is less painstaking than it may sound, and invites play over exploration: there are no instructions as to what each button and lever on that above mentioned crane will do, so it’s up to the player to simply hit them all and discover the key to progress. The level design, given the player’s high-positioned overview when in third-person, often teases what’s coming up next two-puzzles ahead. This invites the player to pick-up on visual clues and often solve the next puzzle before they’ve even begun to think about the obstacle directly in front of them. 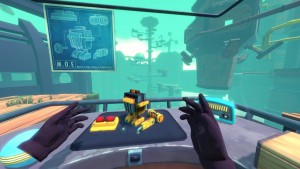 It’s a deliberate tease, and one which will hopefully be present throughout the duration of Wayward Sky‘s campaign. It promotes a healthy curiosity while utilising the benefits of VR’s headlook functionality in a very clever way. Wayward Sky is currently expected to launch around the time of the PlayStation VR head-mounted display (HMD) itself, and you can be sure VRFocus will keep you updated with all the latest details from Uber Entertainment
.