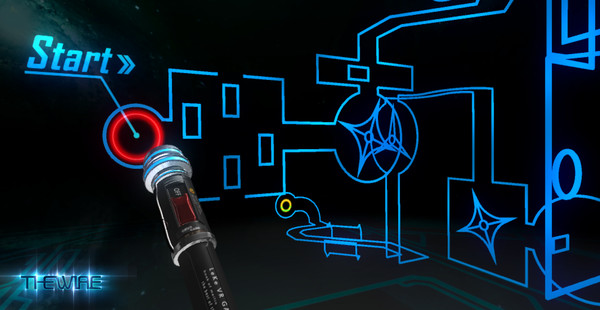 Puzzle based videogames are a popular genre when it comes to virtual reality (VR), and The Wire – not to be associated or confused with the hit TV show – has come to the HTC Vive on Steam to further test players.

This title seems to come from a Chinese team from a studio called LekeGame, but the idea of the gameplay translates across easily enough. There are “plenty” of levels to work through which test your ability to logically solve puzzles. From what we can see from the trailer and screenshots, there is a distinctively neon theme, which is matched with electronic music, but the puzzles do look a little more unique than the average one.

However, despite the intricate looking puzzles, according to the developers all that is needed is the controller to simply move forward. What the player must keep in mind is being able to keep on the track, and to win any of the many levels they must reach the end zone before the timer runs out.

The puzzles that feature in these levels include turning cogs, floating circles, and alternating blocks, all which the player has to time correctly to pass and complete the levels. Each of the obstacles move in time with the music, and so it might be an idea to try and concentrate on the music.

The Wire is currently out only for the Vive and is priced at £6.36 (GBP), which is at a slightly discounted price from the original £6.99 price tag.

For more on the latest releases for the HTC Vive, as well as all the news and updates in the world of VR, make sure to check back with VRFocus.