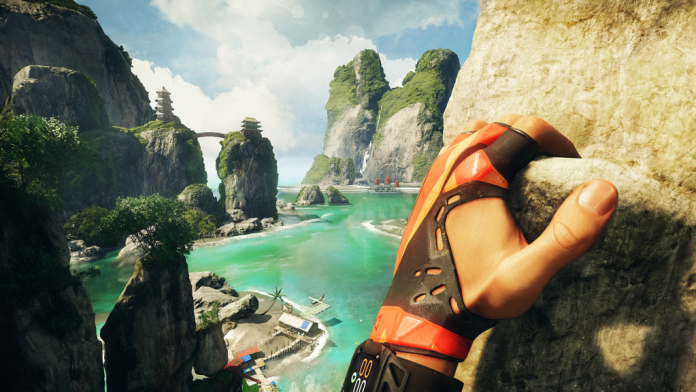 Crytek’s commitment to virtual reality (VR) has been available for all to see for some time. A number of remarkably high quality technical demonstrations at various trade shows across the globe followed by the public release of Back to Dinosaur Island on Steam have lead to the public reveal of 2 head-mounted display (HMD) exclusive titles: Robinson: The Journey on PlayStation VR, and now The Climb on Oculus Rift.

While Crytek are still keeping Robinson: The Journey firmly under wraps, bar the debut trailer revealed at Paris Games Week, the approach to The Climb is much more open. VRFocus has been hands-on with an early build and even at this point it’s a visually impressive experience. Maintaining compatibility with that minimum specification for the Oculus Rift revealed by Oculus VR earlier this year might be challenging, but given that the hardware manufacturer has some degree of influence over the development of The Climb it’s highly probable that Crytek will be creating a title that any early adopter of the HMD can enjoy.

That enjoyment comes from the rush of the experience, as opposed to overcoming the challenges set. The Climb, as the title suggests, is a videogame that relays the thrill of climbing treacherous terrain; in the build VRFocus experienced there was never a moment in which the player had their feet firmly on terra forma. There are however, many occasions in which a ledge may just be too far out of your reach, and misplaced hand placement can result in a shock to the system as you fall through the sky.

A series of welcomingly placed checkpoints and a fade to black prevents the player from being shocked out of willingness to continue upon falling, however a momentary gasp for air is per functionary for every slip: VR is often cited as being a catalyst for immersion, and the first few times the player finds themselves missing the next handhold the sense of impending pain is genuine.

Successful climbing sees the player lifting one hand over the other, slowly making their way from checkpoint-to-checkpoint across one of many optional routes on the cliff face. This is controlled, with the Xbox One controller, via the left and right triggers, with head-look determining where the hands will be placed. Extended reaches can be executed with a leap up the cliff side, but doing so requires extremely quick reactions: pressing the trigger at the precise moment your hand passes the handhold is the only way to ensure a safe landing. 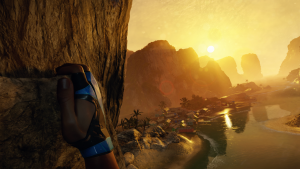 The Oculus Touch version was not available during VRFocus‘ hands-on time with The Climb, though it’s easy to see how motion-control will be of a benefit to the title. Reaching for a ledge as opposed to extending your neck will be a much more natural and immersive input design, with the gripping presumably placed on the Oculus Touch triggers. The Climb is enjoyable enough on an Xbox One controller, but the feeling that it will become an entirely different experience with Oculus Touch was prevalent throughout VRFocus‘ time with the videogame.

The Climb borrows considerably from Back to Dinosaur Island 2 – despite Crytek’s insistence that it is an entirely different product – and this is no bad thing. Back to Dinosaur Island 2 was littered with interesting emergent gameplay and scripted events, and while The Climb evokes a more intense feeling of imminent danger, it was hard not to feel that the gameplay is limited at present. It’s certainly open to more exploration, and hopefully Crytek will see fit to do so in the many months remaining before the title’s release.

The post Preview: The Climb appeared first on VRFocus.