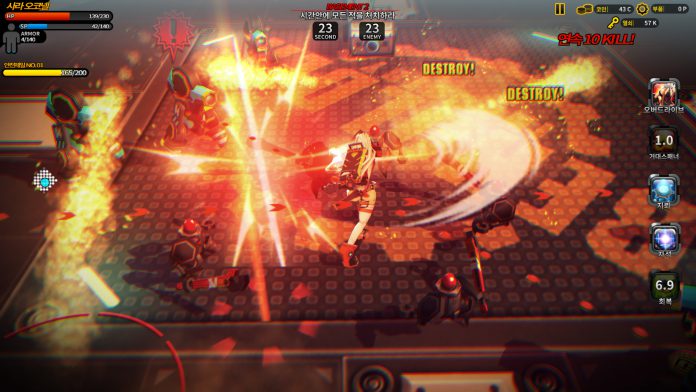 The Oculus Rift will have an enormous launch line-up next week. 30 videogames are just waiting to be downloaded when the virtual reality (VR) head-mounted display (HMD) arrives on 28th March 2016. It’s an impressive list, too, with support for the likes of Frontier Developments, CCP Games, Gunfire Games, and more. As you look down that set of titles, though, it’s easy to spot the lack of eastern developers. Even if the Oculus Rift is an American technology, it’s rare to see a new platform launch without such support.

Here’s where Korean developer Studio HG comes in with Smashing the Battle. Revealed earlier this year as a standard PC title, last week’s Game Developers Conference (GDC) confirmed that the hack-and-slash project is also on its way to VR. In a sense, Smashing the Battle holds the heavy burden of representing a nation’s approach to VR right now, then. But, while it might turn out to be a serviceable tribute to a niche genre in its own right, there’s not much evidence to support the inclusion of Oculus Rift support right now.

This is a third-person action experience played from an overhead perspective, similar to what you’ll see in Lucky’s Tale only with the camera drawn a little further out. It’s also an arena-based battler, and sees players running from platform to platform and throwing themselves into hordes of mechanical enemies. There’s a choice of two characters, both with their own play styles and storylines and both questionably proportioned. The action plays out across multiple levels that will occasionally differ in structure.

Fact sheet done, though you’ll be given plenty more stats to deal with when it comes to gameplay. Both characters are defined by a set of stats such as HP, SP, Armour and Power that can be altered by switching outfits. When on a mission, you’ll have an elaborate HUD – crucially located within the game world to improve comfort – that lists various attacks designated to specific buttons and their cool down times between use. You’ll also get rankings for how you performed in a mission. The two leads, however, differ in weapon choice, wielding a hammer and sword respectively. 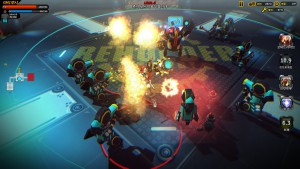 Don’t let any of this fool you; Smashing the Battle is a deceptively simple gameplay experience. There’s just one attack button which you’ll mash as quickly as possible as you dive into the middle of crowds, making sure to time rolls to safety, avoiding incoming attacks. The cool down powers are to be used to provide some relief in the most intense moments; one attack gives you a second’s breather as it charges and is then slammed into the crowd for a small area effect. It’s a little mindless but entertainingly so. It captures the same sense of battle you might get from a Dynasty Warriors title; repetitive, but empowering and nimble. Depending on your Warriors stance, that’s either a good or bad thing.

It’s rare to get this far into a VRFocus preview, then, without mentioning VR support, but ultimately it doesn’t feel like a big part of the equation here. You can lean down into Smashing the Battle’s action to get a closer view, but it doesn’t give you any real advantage or even enhanced spectacle. When you’ve already visited worlds like those seen in ADR1FT and Damaged Core, it’s not hard to question why titles with more tacked on support such as this are coming at launch. It strikes you as filler content; something that Oculus VR is using purely to pad out its launch day and talk about how vast its line-up is.

Not that anyone should be ‘stopped’ from including VR support in their titles if its comfortable, but there are some experiences ready for Oculus Rift on day one that are aiming to justify VR’s existence. Smashing the Battle has considerably smaller aspirations.