Revealed in January of this year, Stormborn Studios’ Runes: The Forgotten Path has received a significant amount of attention from the virtual reality (VR) community. It’s an adventure videogame which has some interesting ideas regarding traversal of its world, though the headline thus far has always been the wizardry and spellcasting.

That headline is delivered in a familiar fashion for many gamers; collecting runes will allow the player to command a spell by drawing a specific shape in the air. Performing such inputs with an analog stick or even upon the Nintendo DS’ touchscreen has always delivered something of a disconnect, but here in Runes: The Forgotten Path it’s your hand circling and zig-zagging to draw upon the powers within, and then it’s your hand that is used to command its execution.

The tutorial reveals all this simply enough, but that’s far from the meat of what is on offer even at this early stage in the videogame’s development. Combat is a key part of the experience, and fully utilising your new found powers does take some getting used to. This goes hand-in-hand with that interesting new take on locomotion.

While the current trend in VR is for teleportation – the idea that by pressing a button an indicator appears and upon releasing it the player will be repositioned at the point indicated – Runes: The Forgotten Path takes a different approach. Here, pressing a button exits the default first-person view and shows the player’s character on-screen, which they can then move remotely with the HTC Vive motion-controller’s touchpad. It’s an intriguing new approach and does work well, however the limitation is that you cannot cast spells while playing in third-person. 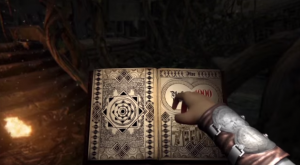 This essentially leaves the player with two options: run defenceless for a vantage point or take the hit with limited manual dodging capability. As every enemy encounter VRFocus has experienced thus far – and the player’s own abilities – are based on ranged attacks, it’s often frustrating to find your quest ended by an inability to counter or plan and execute a strategy for felling your opponents.

Runes: The Forgotten Path has a lot of work still to do, then – the control method is a good start but needs work, and the voice-acting isn’t quite up to scratch at present – but it’s certainly off to an encouraging start. The funding path Runes: The Forgotten Path will take to completion is still not yet decided – whether investment or crowdfunding is the best way forward is an ongoing debate at Stormborn Studios – but VRFocus will be certain to continue following the videogame and keep you updated with all the latest details.