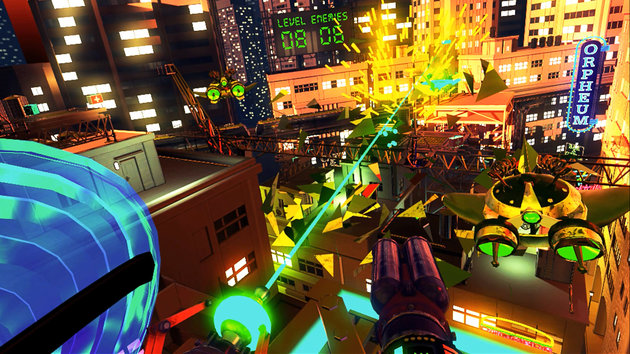 Futuretown’s aggressive pursuit of virtual reality (VR) sees the developer lining up 3 titles for the forthcoming launch of the HTC Vive. While most VR enthusiasts will already be familiar with Cloudlands: VR Minigolf, A-10 VR and Jeeboman have garnered far less attention. VRFocus however, has recently been hands-on with the latter.

A first-person shooter (FPS) based on a traditional arena style videogame, Jeeboman adapts the familiar formula to VR in away that is immediately comparable to Epic Games’ Bullet Train. The player can dual wield weapons as they face ever-increasing numbers of enemies on platforms raised high above the city. Using a warp gun, the player can relocate in an instant, teleporting from one platform to another not only evading incoming fire but also potentially confusing their aggressors, if only for a moment.

Using the HTC Vive touchpad the player can select the weapon held in each hand. All of the weaponry feels aggressively powerful, from rocket launchers to laser guns and shotguns, Jeeboman is a videogame about overpowering your enemy. Accuracy helps, but hitting harder is far more effective. Jeeboman is made to make the player feel like a badass; taking out several enemies with a single pull of the trigger before warping to another platform for a tactical advantage.

As waves are conquered new enemies appear. The player is encouraged to develop their own tactics as the enemy variety increases, with basic troops swarming whilst larger foes reside in the background taking shots from afar. The speed at which the player can warp between platforms and the obvious signposting of their orientation upon arrival is perfectly designed to allow momentum to remain unbroken: it’s not long before the player can be firing at an enemy while using their other hand to choose a new platform and warp without even needing to visually observe their destination. It becomes natural. It becomes instinctive. 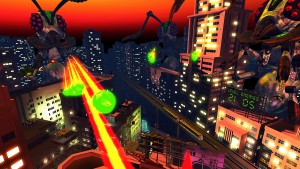 If all of this sounds familiar, that is because – for the most part – it is. Jeeboman plays almost identically to the technical demonstration from Epic Games that wowed audiences at Oculus Connect 2, Hollywood, in September 2015. The difference here is the benefits offered by Room Scale tracking. Jeeboman allows the player to move freely upon the platforms they warp to: not just a foot in either direction, but the full width and depth of the platform. The player can dodge and manoeuvre to avoid enemy attacks and line-up their shot, collect health packs or ammunition and, in time, use environmental detail to avoid large red grids that try to force the player off the platform.

Jeeboman is a very good looking title, relying upon familiar science-fiction neons and metallics for its environments but incorporating a unique style for enemy design. Built using Unity, Jeeboman proves that the engine still has plenty to offer VR development despite having appeared to be outstripped by Unreal Engine 4 some months ago. The sound design is incorporated well, never knowingly contributing to atmosphere and perfectly balanced in that same subtlety.

A wonderful adaptation of familiar videogame mechanics to VR, Jeeboman deserves far more attention than it has received thus far. The immediate enjoyment of the experience is without question, though whether or not Futuretown can discover ways to increase longevity – be it online leaderboards, unlockable assets or multiplayer gameplay – remains to be seen. With only a few months until launch, any decisions about Jeeboman‘s long term strategy will need to be made soon, and VRFocus will keep you updated with all the latest details.