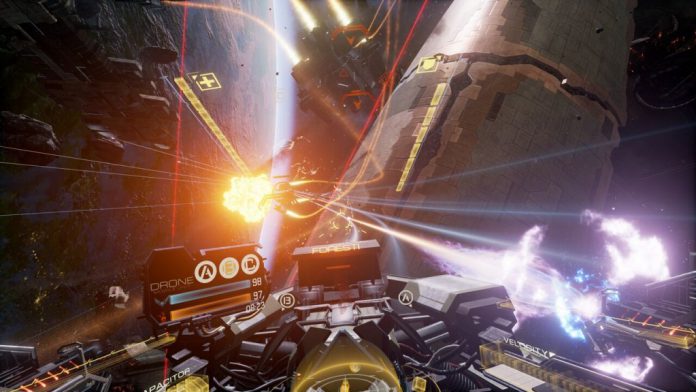 The eyes of the virtual reality (VR) community have been on CCP Games’ EVE: Valkyrie for over 2 years, as the title has regularly been heralded as the poster child for the Oculus Rift. This keenness will only increase now, as Oculus VR has confirmed that all pre-orders of their head-mounted display (HMD) will include a copy of the space combat simulator for free. VRFocus recently got hands-on with a much deeper build than has ever been showcased before, looking at a near-final version of the multiplayer gameplay as well as some of the dressing that takes place outside of the shooting.

The menu screen, originally revealed by CCP Games CEO, Hilmar Pétursson at VR Intelligence, San Francisco, last month, is a VR lobby all of it’s own. The player has a number of different options lined-up in their forward-facing field-of-view, including customisation of their ships, docking bay loadout options and, of course, the ability to jump into a battle. The customisation of ships includes both aesthetic modifications and equipped weaponry, functionality and armour, and is available depending on resources and experience collected throughout gameplay.

Resources are collected through collecting salvage from fallen enemies in-game, and then spent to upgrade existing ships or purchase new craft. A gating system, unlocking blueprints for new ships, prevents the player from simply saving all their salvage and heading straight for the most expensive ships and weaponry, forcibly maintaining the difficulty curve of handling and assault. CCP Games stated to VRFocus that they are still working on the balancing to ensure that experienced players don’t artificially outgun newcomers simply by having the best armour and weaponry mounted on the fastest craft available.

The variety of ships was also revealed in greater detail in this latest build. The Wraith is your standard all-rounder, while the heavy and support classes are made for getting up close and providing assistance respectively. The default set-up of the heavy is by far the most difficult to handle in a fire fight, with only close range high-impact weaponry available, but exchanging the shotgun for a lock-on weapon eased the learning curve significantly. The support craft’s default weaponry has a twin-function; able to heal friendly units as well as damage opponents, though the later is most certainly a last ditch effort as the speed of these vehicles allow the player to escape from heavier aggressors much easier than it would be to face them head-on in a fire fight. 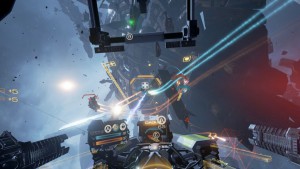 Taking these newly revealed ships into battle, of which the player can select up to four to add to their docking bay prior to each match, CCP Games offered 2 gameplay modes during this preview. The team deathmatch that has been shown at almost every event over the last 2 years is now fleshed out with rewards for killstreaks, double kills and more. These typically grant additional experience, allowing for players to unlock new ships faster as a result of taking control of the battle. The salvage earned in-game is totalled and divided across the team to ensure that no single player spends their time simply gathering loot and not engaging in the core gameplay.

The second gameplay mode, tentatively titled ‘Control’, previously revealed at EVE Fanfest 2015, sees 2 teams battle to hold up to three control points for the longest duration possible. Similar in scoring to Battlefield‘s Conquest gameplay mode, however in EVE: Valkyrie camping is not an option: players are always on the move. So instead each player can drop a drone at the designated control point which will then begin capturing the base or attacking enemy drones in the local area. Only one drone can be dropped at any one time, but a short cooldown period (the length of which is still being determined) related on-screen informs the player of when their next drone will become available.

A small selection of maps where available across both of these gameplay modes, including the newly revealed ‘Shipyard’. Here, players are treated to a genuine sense of up and down. Typical maps on EVE: Valkyrie are essentially asymmetrical regardless of how densely they’re packed with objects, and once in the battle any direction is good for travel. In Shipyward however, the clutter of solid, decaying metal promotes an almost tangible sense of speed and distance. The player can often feel as though they’re flying upside down or sideways as they navigate the panels and girders in an attempt to outflank their opponents. 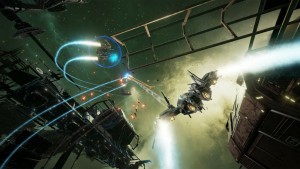 Many new aspects of EVE: Valkyrie were revealed in this new build, however it still feels as though there’s much left to discover. We’re now seeing a videogame product opposed to an interesting design, and there’s certainly value in that, however there’s much more that needs to be uncovered before a verdict can be formulated on just how engrossing EVE: Valkyrie will be days, weeks or even months after release. The fact that VRFocus spent over an hour in this build playing without breaks is most certainly positive, and the rewarding leaderboard and experience systems now incorporated were enough to leave us wanting more.