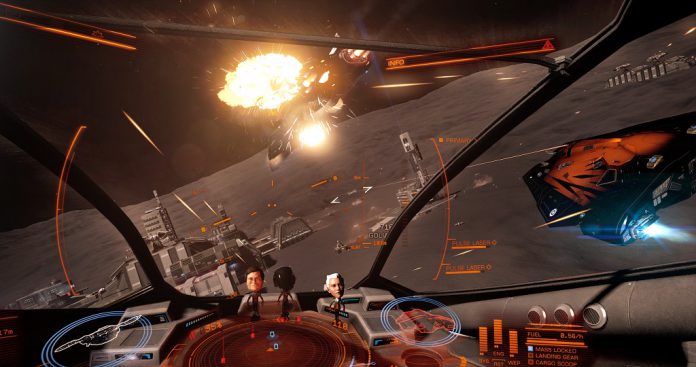 Elite Dangerous: Horizons is a mammoth expansion to the already generous playscape of Elite Dangerous, adding new planetary landings to the mix. The player is thrown into a brand new vehicle for these excursions – the ‘Scarab’ Surface Recon Vehicle (SRV) – and this additional content made up the bulk of VRFocus‘ most recent hands-on time with the VR edition of Elite Dangerous.

Concerned for the welfare of those in attendance of the press event, members of Frontier Developments’ team were keen to assure that the participant could leave the experience at anytime where they to feel uneasy. It’s true that the SRV is not quite as comfortable an experience as most other elements of Elite Dangerous in VR (though later the team did contact VRFocus to apologise that their PC rig was not correctly configured, which may have attributed to these issues) however, despite this VRFocus was perfectly able to experience the new content for over 15 minutes without hesitation.

The reason for the lessened comfort, one could argue, is that the SRV controls unlike anything else in Elite Dangerous and significantly different from similar interpretations. Far removed from the traction-heavy rover of The Martian: VR Experience and more flighty that the drift-heavy tanks of Rebellion Development’s Battlezone, the SRV is at first an unwieldy beast. Getting to grips with the acceleration and turning arcs of the vehicle whilst on the ground is one thing, preparing yourself for the minimal control offered whilst in the air is a yet more difficult task.

And in the air you shall be. A lot. The planet upon which the preview build was set was of a very rough nature; natural drops and ramps litter the environment, resulting in a very bumpy ride. The low gravity of the planet meant that the player would regularly leave the surface for several seconds even when travelling at very low speeds. Hitting a jump at top speed would send the SRV hurtling skyward, and doing so at an unaligned angle would inevitably result in uncontrollable spinning. Attempting to land wheels-down from these moments is almost as much of a challenge as the enemies the player will engage with. 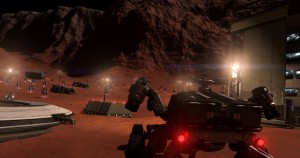 Though suggested to be an optional element of this demonstration version, VRFocus of course endeavoured to try every element of Elite Dangerous: Horizons‘ new VR content. A series of drones surrounded a crashed ship, suggested to be monitoring it; scanning for life signs and resources. They won’t attack of their own accord, VRFocus was informed, but will ferociously defend themselves without hesitation. This, as it turns out, was an understatement.

The aggressive nature of the enemy defence was amplified by the difficulty of targeting with the SRV’s relatively low-grade weaponry while navigating the uneven terrain. What was moments ago a gentle – if cumbersome – cruise across the surface of an alien planet was now an assault on the senses and a direct challenge to precision hands-eye co-ordination and forethought. One might suggest that inaccuracy was due to unfamiliarity, though in reality the SRV is not equipped for fast-paced combat.

Elite Dangerous: Horizons‘ content marks a stark contrast to the base content of Elite Dangerous, and allows for greater exploration opportunities. VR is perfectly suited to this and, given time for players to adapt to the added immersion of the medium, the additional variety of gameplay opportunities offered by Elite Dangerous: Horizons will surely only aid player endearment. Of course, with Elite Dangerous‘ Oculus Rift and HTC Vive compatibility confirmed for the imminent launches of both devices, it’s only a matter of time until would-be space adventurers are able to discover the highs-and-lows of extra-planetary exploration for themselves.