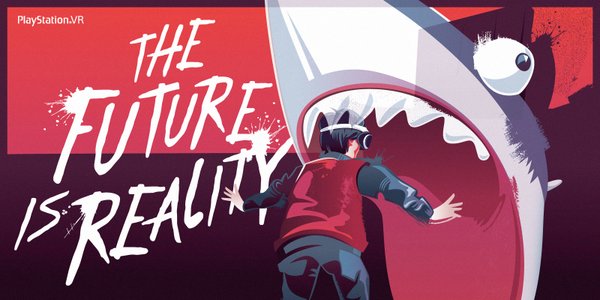 If you didn’t know by now, today is Back to the Future Day, recognising beloved time-traveling comedy Back to the Future Part II‘s depiction of 21st October 2015. In the 1989 film, Marty McFly (Michael J. Fox) and Doctor Emmett Brown (Christopher Lloyd) travelled to the future – currently the present – to save the McFly family. Back to the Future Part II featured a bold vision of the future with flying cars, self-drying jackets and, of course, hover boards. We’re still far from truly realising many of the innovations dreamt up in the classic movie, but PlayStation VR is today poking fun at one experience it is bringing to life to some degree.

At one point in the movie, Marty is standing outside of a cinema that’s currently showing the fictional Jaws 19. A promotional hologram for the movie unexpectedly emerges from out of the cinema, and leans down to bite him. Marty takes this as a very real attack, and is relieved to find the shark’s bite is simply a trick. PlayStation UK has paid tribute to this memorable sequence with new art seen above. It features a player dressed like Marty with the PlayStation VR virtual reality (VR) head-mounted display (HMD) on, finding himself in the jaws of the shark once more.

PlayStation VR fans will of course recall that SCE London Studio has developed a popular tech demo for the HMD named The Deep, which does indeed feature a shark attack at the bottom of the ocean. PlayStation UK’s message signs off with a link to one of last year’s videos – seen below – promoting PlayStation VR, which was then carrying the codename Project Morpheus. It showcases reactions to The Deep demo as it was shown as various events. It’s not quite the Back to the Future experience, but it’s as close as fans can get for now.

PlayStation VR is yet to get a full release date and price, though will be launching in the first half of 2016. VRFocus will continue to follow PlayStation VR closely, reporting back with any further updates on the device.

The post PlayStation VR Celebrates Back to the Future Day with VR Sharks appeared first on VRFocus.