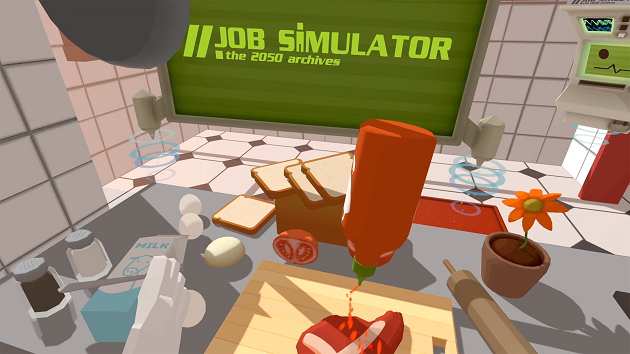 There have been mixed emotions today with the news of HTC Vive’s hefty price tag, but rather than concentrate on the doom and gloom of how the Vive will be priced higher than the Oculus Rift, there is plenty of good news to be had with this announcement. Owlchemy have expressed their pride in Job Simulator‘s inclusion in the HTC Vive consumer bundles.

Owlchemy Labs released a blog post today explaining that Job Simulator will be included in the box when consumers receive their HTV Vive orders, considering how the video game will be considered in time to come, saying: “We’re absurdly proud to be included with the hardware. This is quite a rare occasion, giving us a chance to be remembered as the Mario/Duck Hunt of VR. We can’t wait for players to throw paper airplanes, juggle steaks, and lob objects at their boss with no threat to their actual career.”

The developers didn’t leave out mention of its bundle partner Fantastic Contraption, saying: “Contraption is one of our favorite upcoming VR titles, at least judging from the insane amount of hours we’ve logged in it at Owlchemy HQ.”

The HTC Vive pre-orders will start at 10:00am EST on 29th February and shipping will start on 1st April. For more of the latest on the HTC Vive stay with VRFocus.