With virtual reality (VR) head-mounted displays (HMDs) soon to launch for high-powered PCs and consoles, much of the industry’s attention is understandably focused on videogames at this point in time. As such, it’s been a while since we’ve heard from Oculus Rift creator Oculus VR’s film-centric division, Oculus Story Studio. The team has broken its silence this week however with a new blog post that has also revealed some new media for its first two projects, Lost and Henry. That content can now be seen below.

On display is one new GIF for Lost, which was first revealed at the start of the year, and one new image of the studio’s follow-up, Henry. The post itself details the balance of creating narrative content that players can follow while so deeply immersed within an environment. In terms of Lost, this meant making the huge mechanical hand that can be seen in the experience’s poster actually acknowledge the viewer.

Meanwhile, Henry is about a lonely hedgehog that is celebrating his birthday and longs for some company. Viewers will be able to follow Henry around his house as he prepares a cake and more, often finding that his spikes cause more issues than he’d like. As such, Oculus Story Studio noted problems with having a lonely character when the very nature of VR enable viewers to feel like they were in the room with him.

A VR trailer for Henry can currently be found online, while Oculus VR is anticipating launching the full feature alongside the Oculus Rift itself in Q1 2016. It’s not yet clear when Lost might launch. Oculus Story Studio is working on plenty of other projects that are yet to be revealed in full.

VRFocus will continue to follow Oculus Story Studio’s work in VR closely, reporting back with any further updates from the group. 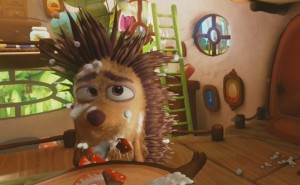