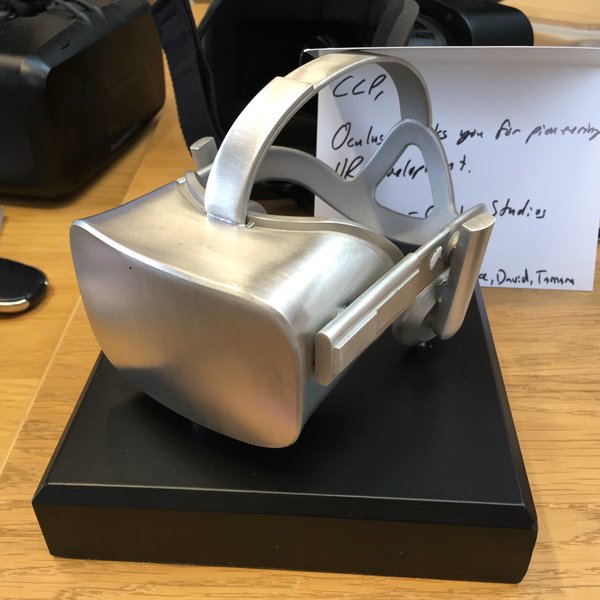 Perhaps the videogame that’s been associated directly with the Oculus Rift head-mounted display (HMD) for the longest period of time is CCP Games’ EVE: Valkyrie. This anticipated multiplayer space shooter was first announced all the way back in 2013 and has since becoming something of a poster child for Oculus VR’s upcoming device having attended numerous events and served as many people’s first VR experience. Oculus VR itself has recognised that, and has today awarded CCP Games itself with a rather unique trophy.

The developer’s Sigurdur Gunnarsson recently posted an image of a silver Oculus Rift trophy that Oculus VR sent to the studio. The image can currently be seen below. The trophy resembles the consumer version of the Oculus Rift, which is due to launch in the first quarter of 2016. Along with the trophy is a note. It’s partially obscured but appears to read in-part: “Oculus thanks for you pioneering VR development”. More of the message can be seen, but is covered up by the trophy itself, which is sitting next to what seems to be one of the Oculus Rift’s second development kits (DK2).

EVE: Valkyrie sits players in the cockpits of craft from the EVE Online universe and lets them take part in multiplayer dogfights. The title is also on its way to the PlayStation VR HMD on PlayStation 4 but it remains to be seen if support for the HTC Vive will also make its way onto the PC version. That version is currently in pre-Alpha testing, with a handful of lucky DK2 owners getting a chance to try it out early. It’s not yet clear when the full version of the title will become available, nor how CCP Games plans to distribute it.

VRFocus will continue to follow EVE: Valkyrie closely, reporting back with the latest updates on its progress.