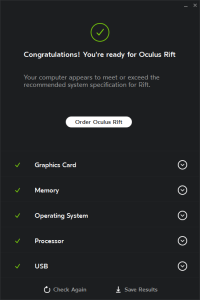 After years of waiting the Oculus Rift is now available for pre-order! You can order the Rift true the following website shop.oculus.com. The delivery date is already estimated from March to May 2016. The Oculus Rift comes with a remote control, an Xbox One controller and the games EVE: Valkyrie and Lucky’s Tale.

Facebook only charge you if your Rift is sent. A pre-order gives you a pre-order spot on the list for Oculus Touch controller. For those who are unsure whether their PC can handle the Rift. Oculus offers a small application that can check if you system is ready for the Oculus Rift.

The minimum requirements are:

We’ve ordered the Rift as well, but had a lot of trouble in the process. First the website showed us a white screen. After that we’ve received the message there was an issue and when we finally entered all the info the website hung. After retrying we received a message that only one Rift is allowed per costumer.

In a Tweet Oculus advise is to send an e-mail to support. If you experience any trouble the chances are that you won’t receive your rift in time since the expected ship date is set to May 2016.

@vrbites Please contact customer support at https://t.co/4pTdeH2404, they’ll be able to look up the order and verify.