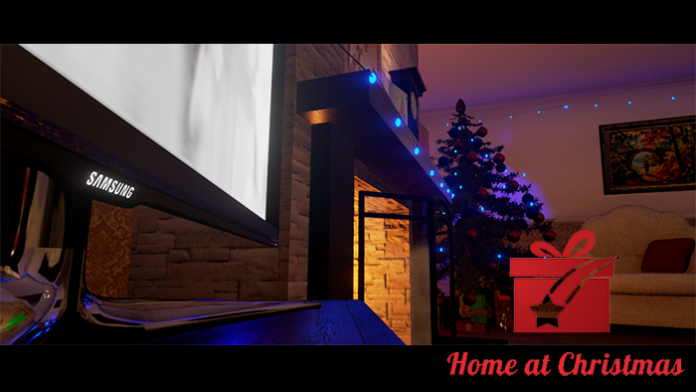 It’s less than a week until Christmas Day is upon us and of course through the power of virtual reality (VR) it is possible for it to be Christmas for you today, or tomorrow or any other day. Whilst not as dramatic in number as back in October for Halloween Oculus VR Share does have a several Christmas themed experiences, one of which we shall be spotlighting on today’s New To VR.

Home @ Christmas is one of those experiences that is what it says. A modern version of the contemporary Christmas scene, the experiences features the living room of a house bedecked with Christmas lights. A tree stands in the corner, presents underneath it, all of which bask in the glow of the nearby open fireside. Steaming hot chocolate stands on the side waiting to be drunk as you watch the classic Christmas film on television. All as snow falls down outside.

Developed by Craig Cook, Home @ Christmas comes to Oculus VR Share as an Oculus Rift DK2 head-mounted display (HMD) experience and requires an SDK version of 0.8. Further technical specifications can as always be found on the Oculus VR Share page linked above.

New To VR will be back on VRFocus tomorrow with less seasonal VR fare. Join us then.