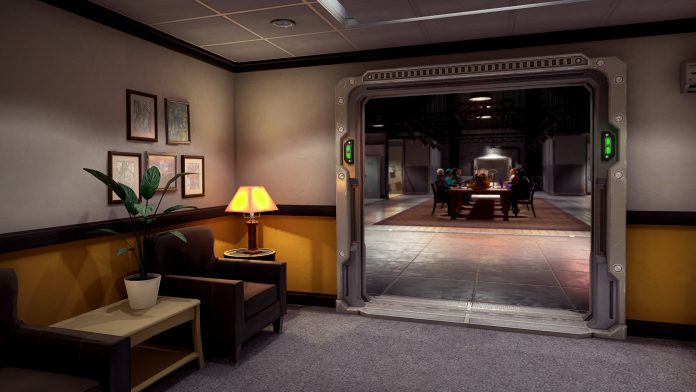 Today nDreams has announced the release date and pricing of its newest virtual reality (VR) title, The Assembly, and VRFocus has also written up a preview of what the latest gameplay has to offer so far. Along with this news, the studio has released two videos that will give those interested in the title more of an insight into what the videogame really is about, and how far it has come along.

In one of the two videos released today alongside the announcements, the Game Overview gives added insight into what The Assembly is made up of, and fleshes out what the narrative consists of. Featured in this video, as well as others they have released, is Martin Field, Art Manager, and Jackie Tetley, Sr Game Designer. They both explain throughout the video what the motivation behind making The Assembly, with Tetley saying: “We didn’t make a throw away experience with some interesting experimental mechanics, we wanted to create something with a comprehensive story that spans multiple hours and a high quality realistic artstyle.”

They compare the narrative to those like the shows that come from Netflix or HBO than a traditional videogame narrative. “A chapter based approach has been really useful,” says Field in the video. “Not just as a narrative tool, but also to allow flexibility when playing in VR. If you want to play for 20 minutes, or for an hour, we give you that choice.” The main piece of information to take away from the video is that during the Assembly, the outcomes depend on your actions rather than your words.

The second video, Progress Trailer, is much shorter than the previous one at eight minutes, but condenses the information down into a cinematic trailer.

For more on the developments of The Assembly in the run up to its release, as well as all the latest news and updates in the world of VR, make sure to check back with VRFocus.