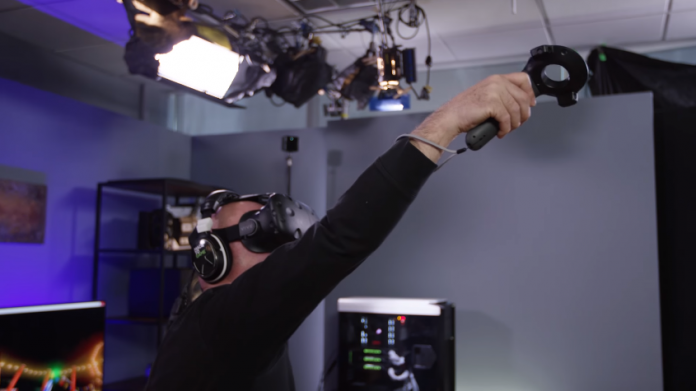 It’s always fun watching celebrities and well known face try out new tech and pull faces of wonder – a little like Hillary Clinton during the Democratic National Convention. MythBusters’s Jamie Hyneman, who claims to not be a complete newbie with virtual reality (VR), has tried out NVIDIA VR Funhouse, and although his expression is pretty solid, he is incredibly impressed.

All the way through the video, which can be watched below, Hyneman consistantly said things to the effect of the movements, sounds, and object reactions were so realistic. “One of the most impressive things that I was seeing here was actual physics that had been applied to these objects.” When trying out the shooting gallery, Hyneman expresses “that’s more fun than the real thing” along with a laugh.

“All of those details that you’ve been able to build in these virtual environments equal more than the sum of its parts. That’s what makes you actually feel like you’re really there.”

NVIDIA VR Funhouse is a mini-game collection set in a fairground where layers can pop balloons, throw basketballs into hoops, and throw octopus against the wall, all to show off NVIDIA’s impressive graphics capabilities, and it was also said that it will be open sourced so it can be used as a learning platform for developers and artists to try their hand at creating similar experiences using the power of Unreal Engine 4 and the company’s latest high-end graphic card, the GeForce GTX 1080.

As mentioned before, watch the video below to see how Hyneman reacts to the whole experience. For more on the latest celebrity reaction videos, as well as all the news and updates in the world of VR, make sure to check back with VRFocus.