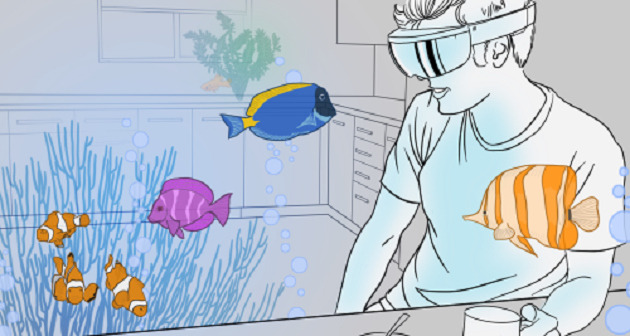 In December VRFocus reported on Microsoft launching a competition called ‘Share Your Idea’, where anyone from around the world could submit ideas for an app that the company would build for its mixed reality (MR) head-mounted display (HMD) HoloLens. Submissions ended on the 12th January and the HoloLens Team has now revealed the three chosen finalists.

Chosen out of the hundreds of ideas entered was Airquarium, Grab the Idol and Galaxy Explorer. In Airquarium a user’s room becomes filled with marine animals. They can tap on an animal to learn more about it, feed it, or remove it. Users can use an animal list to add more animals of a certain type. The marine life will have autonomous responses to the user’s actions, so if food is dropped, nearby animals will come to eat it. If the user is close to an animal and moves forward quickly, the animal will startle. Alongside animals there would be environment objects, such as coral that could be found on the floor or ceiling.

The second idea, Grab the Idol focuses on the first-person puzzle genre, where a room is filled with randomly generated traps to evade and puzzles to solve. Users would active switches while avoiding pools of lava and spinning blades, whilst trying to get the treasure. And while one room could have a multitude of challenges in it, going to another would open up a new set.

The third finalist, Galaxy Explorer aims to give users the ability to wander the Milky Way and learn about our galaxy. Navigating through the stars and landing on the myriad of planets that are out there.

Public voting for the ideas will open this Thursday January 21st at 12:00pm PST here.

VRFocus will continue to follow the HoloLens ‘Share Your Idea’ competition, reporting back with the announced results.