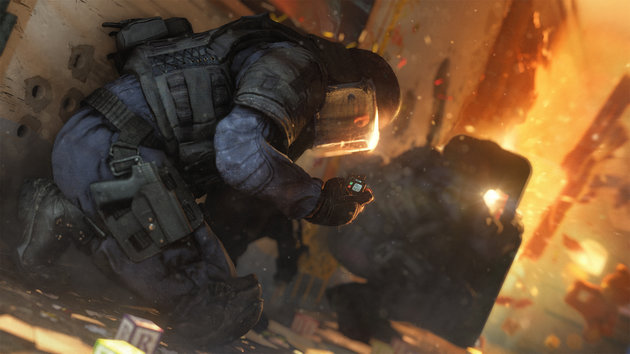 Your squad is in position, lined up outside two doors. There are six hostiles inside and four of you; it’s going to take all of your skill and concentration to get out of this one unscathed. A teammate kicks the door and throws a smoke grenade as you pull a mask over your face, your breathing starting to fog your vision. You wade through the smoke in the direction of voices, slamming your shoulder into cover. Taking a deep breath, you prepare to lean out and open fie.

The Rainbow Six franchise has been away for some time, but makes a welcome return next month with Tom Clancy’s Rainbow Six Siege. Of course, the tactical first-person shooter (FPS) won’t feature virtual reality (VR) support of any kind but, thinking about it, there are plenty of ways in which the technology could enhance the series’ brand of strategic action.

Like many shooters, Rainbow Six casts players as an elite brand of soldiers. Unlike other shooters, however, this doesn’t mean you’re a one man army. Instead, players have to think carefully about how best to approach each situation, using tactics, gadgets and quick reflexes to overcome the odds. VR could transfer into each of these elements, perhaps creating one of the best FPS experiences for head-mounted displays (HMDs).

When it comes to planning, for example, players could use VR to create in-depth strategies. Pre-mission, you could bring up a 3D render of the building of facility you’re going to breach, leaning down into a map and inspecting every element in great detail. Or imagine being in-mission and using a small gadget to do some recon, bringing 3D information to you as it goes. Previous Rainbow Six titles have had players plot a course through maps using a 2D interface, but VR could be utilised to allow much more considered options. 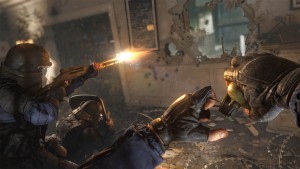 Controlling those gadgets could be enhanced with VR too. When using a camera bot in the latest entry, the screen the squad is viewing it from is simulated as the player’s full view. Imagine being able to change this with VR and steering the bot with a device with the screen in your own hands, keeping players grounded in the world. The same goes for pulling on a pair of night vision goggles or a gas mask; these could become authentic experiences in VR that doesn’t break immersion. Or imagine Oculus Touch, PlayStation Move to the Steam VR controllers to accurately set charges and toss grenades through windows.

Then there’s the combat itself. Smart soldiers know that cover is the key to success in Rainbow Six, and using positional tracking on a HMD to lean in and out of that cover to take shots could be a thrilling experience. VR could also be used to realistically line-up scopes and iron sights, especially now that position tracked controllers are becoming the norm. Think something like Epic Games’ Bullet Train, only with a sense of threat and fragility that makes it all the more tense.

Rainbow Six represents huge potential for the VR shooter, possibly enhancing many of its core elements. With Ubisoft committing to VR development already, perhaps this is one franchise that we could see take advantage of the tech in the near future.