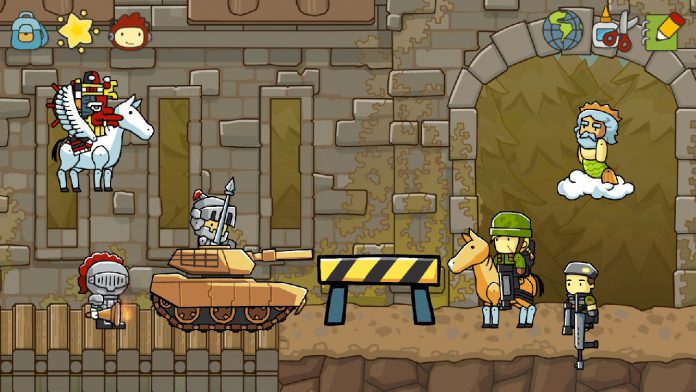 It’s chaos. A caveman is fighting an elephant while angels over overhead, joined by people flying jetpacks. A cat rides past on a skateboard while a tiger struggles on stilts. You’re standing on a ladder using a spyglass to survey the madness, when you see your prize, a Starite. You summon and flying car, navigating a swarm of winged dolphins as you grab the object. This is the world of Scribblenauts, and it could be one of the most insane experiences to come to VR ever.

Scribblenauts Unlimited released on mobile platforms this week. 5th Cell’s underrated creation series has somewhat faded into obscurity since its debut on the original Nintendo DS all the way back in 2009. The series has always delivered on an extremely ambitious promise; to allow you to type in the name of almost any object or animal in existence and have it brought to life within the videogame. There hasn’t been a truly new entry into the franchise since 2013 but the arrival of virtual reality (VR) head-mounted displays (HMDs) next year mean the franchise is practically begging for a refresh.

Scribblenauts could be entirely transformed within VR, going from the 2D puzzle game we all know  and love to a fully 3D experience in which players could conjure up just about anything that comes to mind. Endless fun could be had simply jumping into a world and bringing a huge range of wildlife into the mix. Want to waddle amongst penguins? Watch a lion hunt a zebra? Or how about riding an elephant for yourself, planting wings on its back and taking to the skies. All of that and more would be possible here, making for a truly free VR experience.

Then there’s vehicles. You could drive a fire engine or feel what it’s like to ride a hoverboard. Want to race others in the fastest sports cars? Pilot a helicopter? It would all be as simply as typing the desired mode of transport in, stepping into the cockpit and taking off.

Using position-tracked controllers would also bring a new level of interactivity to the franchise. Imagine puzzles in which you have to use tools in realistic ways, or wield swords to defeat enemies. The series has always had an eye for humour too, and there’s plenty of opportunities here. You could type in ‘Oculus Rift’ while wearing one, only to put it on and find yourself in virtual virtual reality (VVR?).

VR platforms are going to bring about entirely new possibilities for the creation genre, and the Scribblenauts franchise is one that really should be taking advantage of that.

The post Make it a (Virtual) Reality: Scribblenauts appeared first on VRFocus.