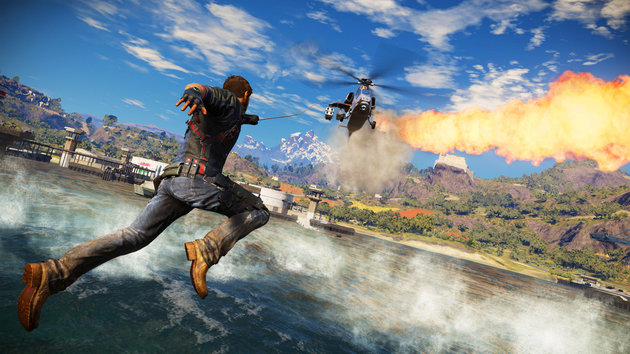 You set out towards the edge of the plane and look down, an island paradise sprawling out far below. Taking a deep breath, you take one final step off and spread your arms, opening a wingsuit that turns you into a superhero, soaring through the sky as bullets start to scream past your head. Enemies have spotted you, so you deploy a parachute and ready the all-important rocket launcher. A couple of well-placed shots to the building and it begins to crumble around you as you make a smooth landing. Welcome to Medici.

Sometimes all you want to do is blow stuff up. That’s pretty much the foundation that the Just Cause series has built itself upon. Avalanche Studios’ sandbox action titles don’t feature open worlds so much as destroyable ones, and that hasn’t changed with the latest release, Just Cause 3. This is a franchise that provides joy through spectacle and scale, two aspects that we’d love to see realised within virtual reality (VR) technology.

In fact, it’s already possible to experience a small slice of Just Cause 3 in VR thanks to publisher Square Enix’s wingsuit app, which is compatible with the Google Cardboard smartphone-based head-mounted display (HMD). The set of 360 videos allows viewers to look around the world as protagonist Rico glides through the air, causing havoc with his grappling hook and more. But it’s just a taster for what a truly VR compatible Just Cause could be, which is something that invites hours of daydreaming.

Bringing down one of the title’s enormous structures in VR would be a sight to behold and something that, surprisingly, hasn’t been seen anywhere else on the Oculus Rift just yet. If there were ever an experience to empower players with its sheer destructive force, Just Cause is it. Imagine seeing concrete behemoths topple in front of you as if they were Jenga blocks, or causing explosions that swell into the sky, their scale dwarfing you in a way that no other videogame has done before.

Then there’s the aforementioned wingsuit, the use of which could make a VR Just Cause turn into something like Windlands with rocket launchers. The sensation that flight can give you with VR is quite convincing, even with your feet placed firmly on the ground. Firing off RPGs and using a grappling hook to zip around in any direction would be a liberating experience, especially with the help of Oculus Touch, PlayStation Move or the SteamVR controllers.

Vehicles have always played a big roll in the series too, and jumping into a jet in VR, only to later dive out and parachute to safety could be a really memorable experience for VR fans. Plus, Just Cause 3 allows you to ride cows which we can only see being all the more worthwhile with a HMD on.

Just Cause is a series that could provide endless hours of VR fun, allowing players to soak in the sheer spectacle of its beautiful madness. Hopefully one day we’ll have far more than a simple smartphone app that lets us peak into the crazy world of Rico Rodriguez.

The post Make it a (Virtual) Reality: Just Cause 3 appeared first on VRFocus.